The Times We Lived In: A doughty history professor in her home office 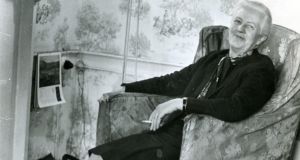 In February 1968, this newspaper decided to investigate the situation of female academics in Irish universities. An entire page was given over to the topic, and a feature writer despatched to interview four of these doughty women.

The writer was Mary Maher, a pretty doughty woman herself, and the chosen academics were Maire de Paor, lecturer in archaeology at Trinity College, Dublin; Sister Benvenuta, lecturer in 17th-century history at University College Dublin; Mary Lynch, director of practical training at TCD’s Social Studies department; and Annette J Otway-Ruthven, Lecky Professor of History at Trinity College, Dublin, who in that year was named one of the first women fellows of the college.

Each interviewee was photographed, Dr de Paor looking youthful and energetic, Sister Benvenuta jaunty – and slightly saintly – in her nun’s robes, and Mary Lynch carrying a sheet of paper with the air of a woman who knows what she’s about.

The fourth picture, reproduced here, is about as un-academic as it’s possible to be. It shows Prof Otway-Ruthven sitting – lounging, really – in an armchair, cigarette dangling casually from her hand. It’s clearly very familiar territory for her; and clearly also, despite the chair’s very loose loose cover and silly, frilly border (not to mention the mad angle of that lampshade) as much a working environment as a place of relaxation.

Her bag sits near her feet; on the wall, within easy reach, is a calendar; notes of some kind dangle precariously from the mantelpiece. A home office before such a thing was ever heard of.

It would be interesting to know what our photographer said to Otway-Ruthven to elicit the very genuine smile she offers to the camera, for she was not a woman to suffer fools gladly. One of her most distinguished students, FSL Lyons, who later became provost of Trinity, recalled that “the first and most valuable lesson she taught us was that history was not a soft option”.

This and other Irish Times images can be purchased from: irishtimes.com/photosales

Versatile Dublin rappers: I'd like to thank all the smack heads on Abbey Street
8