An Irishman’s Diary on a prophetic play by Terence MacSwiney

Centenary of publication of ‘The Revolutionist’ 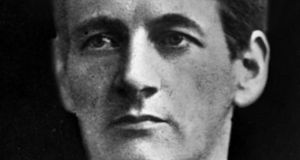 Terence MacSwiney wrote five plays in all and the fifth, The Revolutionist, was published 100 years ago this year. Historian Patrick Maume has described it as “an important statement of MacSwiney’s philosophy of self-sacrifice”.

Terence MacSwiney is probably still remembered today for the way his 74-day hunger strike in Brixton Prison in 1920 drew world attention to the independence struggle going on in Ireland at the time but he would be less well remembered as a poet and playwright. He helped to set up the Celtic Literary Society in Cork in 1901 and seven years later co-founded the Cork Dramatic Society with Daniel Corkery; they hoped that the society would become Cork’s version of the Abbey Theatre in Dublin.

He wrote five plays in all and the fifth, The Revolutionist, was published 100 years ago this year. Historian Patrick Maume has described it as “an important statement of MacSwiney’s philosophy of self-sacrifice”.

The play’s main character, Hugh O’Neill (a name that resonates in Irish history), wants to rescue the Irish people from the secret political societies that are widespread in the country as home rule is about to be brought in. He will not align himself with his revolutionary colleagues, who support the secret societies, because he believes they must keep “the fight straight and consistent”. He fears that secrecy will be divisive and stop the people working together against the English.

Throughout the play, Hugh strives to find a way to reconcile the growing divisions among the people and he comes to the conclusion that his sacrificing of himself may be the best means of uniting them. He takes Robert Emmet as his model and, with Emmet’s famous speech from the dock in mind, asserts: “Emmet’s last words move us more than any possible oration he might have delivered as first president of the Irish Republic.”

Hugh believes that other men can emulate Emmet and he gives his own life in the service of his country. MacSwiney’s message is that the hero who sacrifices himself can unite a people and galvanise the country into action.

A year after the play was written, the old Fenian O’Donovan Rossa died and his body was brought back to Ireland and buried in Glasnevin Cemetery, with Patrick Pearse delivering his famous graveside oration. MacSwiney wrote a memorial pamphlet in which he portrayed Rossa as the ideal of the Irish hero. He referred to seeing him doing his “Easter duty” in Cork cathedral as an old man, “and the picture I have in mind of him . . . makes for me a perfect picture of the consistent life”.

MacSwiney quoted Rossa’s forthright defence of himself against treason at his English trial, “I believe in God, but I defy the devil”, and commented: “If we all have as pure a faith as Rossa’s and act up to it with as fine a constancy, Ireland shall have no need to despair.” Here he was presenting the Irish people with the means of saving the nation – similarly to how he had presented the character of Hugh in The Revolutionist.

But he was not content simply to provide the people of Ireland with literary or historical prototypes, and during the War of Independence, he took on and lived the heroic role he had prescribed for Hugh and assigned to Rossa. While lord mayor of cork and commandant of the First Cork Brigade of the Irish Volunteers, he was arrested by the British and sent to Brixton Prison. After a long and highly publicised hunger strike, he died there on October 25th, 1920.

The press often used theatrical metaphors to portray his long ordeal, conveying the idea that it was a role anyone could perform if they possessed the inner strength to do so. Under the headline, “Patriot of Plain Men”, the Irish Independent wrote that “it is in all of us to become a MacSwiney, dare we but put away as he did all self-seeking and insincerity”.

That is exactly the message MacSwiney himself wished to convey, as is clear from his own oft-quoted assertion: “It is not those who can inflict the most but those that can suffer the most who will conquer.”

After his death, WB Yeats decided to put The Revolutionist on in the Abbey Theatre (it was the play’s first performance). He predicted the play’s final scenes “would greatly move the audience who will see the Mayor in the play’s hero”. It was a huge success.

He also influenced Ho Chi Minh, who was working in London at the time of MacSwiney’s death. He declared: “A nation that has such citizens will never surrender.”