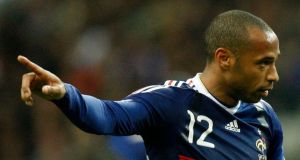 Number 1: Thierry Henry and that hand of his. Photograph: Benoit Tessier/Reuters

I have a theory that the Irish rugby team’s appalling record in Paris is the result of us having too much admiration for France as a country. I’ve racked my brain for a list of reasons we should hate the French, or at least dislike them mildly.
1. Thierry Henry.
2. The Normans.
3. Irregular verbs.
4. You spend years learning their language, then you go to Paris to practice it and they talk back to you in English.
5. Nice food. Lovely wine. But they still can’t make a decent cup of tea.
6. The 2012 frozen pitch.
7. The ugliness of Parisian hotel wallpaper as a contributing factor in the death of Wilde.
8. The French paradox. They eat lots of fatty foods but don’t get heart disease. It’s not fair.
9. The rudeness of Parisians.
10. They even have a street called Rue Rude and the Irish Embassy is on it.
11. In fact, the embassy is on the corner of Avenue Foch and Rue Rude. That’s “Foch ‘n’ Rude”, for short. (Okay, the “c” in Foch is soft, but first-time visitors aren’t to know that.)
12. We always hum along with their anthem at sporting events. They still don’t even know the tune of ours.
13. Foie gras. French women may not get fat, but goose livers don’t have a choice.
14. We gave them Joyce and Beckett, who revolutionised modern literature. They gave us Dion Boucicault, who devised a new improved version of the stage Irishman.
15. Je t’aime (moi non plus) .
16. They’re obsessed with sex, generally.
17. Even their bread is phallocentric.
18. “Va va voom”. The sound of Thierry Henry handling the ball twice and then getting away with it.
19. Le Piat d’Or. The French didn’t adore it at all. They wouldn’t wash their cars with it, probably.
20. We gave them the honour of playing the first rugby game in Croke Park. Then they ruined the occasion by winning, and with a gut-wrenching last-minute try.
21. La trahison des (Vincent) Clercs .
22. The original Chauvinist – Nicolas Chauvin – was French.
23. The Marquis de Sade probably wasn’t the original sadist, but he was so good at it they named it after him.
24. When the Bastille was stormed in 1789, a shocking 14 per cent – at least – of the prison population was Irish. His name was James Francis Xavier Whyte (there were only six or, by some accounts, seven inmates left at the time of the storming) and he was mentally disturbed, so he shouldn’t have been in jail at all.
25. The same poor man had shared prison for a time with the Marquis de Sade. No wonder he was disturbed.
26. The Franco-Prussian War. Started by the French because they didn’t like the wording of a telegram.
27. The Treaty of Versailles.
28. We supplied a French-speaking referee, Alain Rolland, for last month’s France-Wales game. And how did they repay his respect for their language? By addressing him as “Tu”, that’s how!
29. We asked them for an army in 1798. They sent a mere 1,000 soldiers, none of them named “Napoleon”.
30. Also, they landed here in August. The main rebellion had been in June. We know it’s fashionable to arrive 15 minutes late for dinner parties in France, but it doesn’t work so well with insurrections.
31. They didn’t send any soldiers at all in 1803, despite repeated invitations.
32. Even when they did supply military help, results were mixed. In 1798, they fought well at Castlebar, but were mediocre in Ballinamuck. That’s the problem with French armies – you never know which side is going to turn up on the day.
33. They “honoured” the bicentenary of 1798 by starting the Tour de France in Ireland. A succession of drug scandals later, it became known as the “Tour de Dopage”.
34. Marshal Patrice de Mac-Mahon. All right, they made him president, but where did they get that hyphen?
35. L’Origine du Monde by Gustave Courbet (look it up). The model is believed to have been Irish. What would her poor Mammy have thought?
36. They have a province called “Brittany”. No “Irelandy”, though.
37. “I thought ten thousand swords must have leaped from their scabbards to avenge even a look that threatened her [Marie Antionette] with insult. But the age of chivalry is dead. That of sophisters, economists, and calculators has succeeded; and the glory of Europe is extinguished forever.” Edmund Burke, Reflections on the Revolution in France .
38. Did I mention Thierry Henry?
@FrankmcnallyIT
fmcnally@irishtimes.com

How Goodfellas and the gangster class of 1990 changed Hollywood
2

Indelicacy: An extraordinary feminist fable about women and art
9

Mary Lou McDonald talks frankly of her struggles with anxiety
10