Henri Cartier-Bresson: a perfect alignment of the head, heart and eye 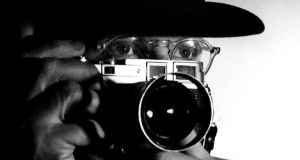 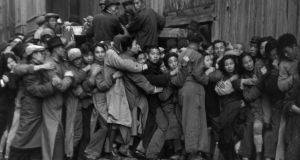 Shanghai, 1948: a crowd waiting outside a bank to buy gold during the last days of the Kuomintang. Photograph © Henri Cartier-Bresson/Magnum Photos

‘I am a visual man,” the great French photographer Henri Cartier-Bresson told Life magazine in 1963. “I watch, watch watch. I understand things through my eyes.” A successful photograph, Cartier-Bresson said, required the alignment of the head, heart and eye.

Cartier-Bresson was known in his lifetime as “the eye of the century”, as reflected in the title of Pierre Assouline’s 1999 biography. When he died, in August 2004, just short of his 96th birthday, newspapers across Europe published the headline: “The eye of the century has shut.”

A decade later, the Pompidou Centre in Paris has organised the first major Cartier-Bresson retrospective in Europe since his death. The exhibition shows the extent to which Cartier-Bresson’s life and work embodied the 20th century.

The Cartier-Bresson family had amassed a fortune from two factories in which hundreds of workers produced white cotton spools labelled “shiny Irish thread”. Young Henri learned English from a governess called Miss Kitty, and was taken to concerts, exhibitions and museums. He had no desire to take over the family business, and referred to his uncle Louis, a painter who was killed in the first World War, as his “mythical father”.

Cartier-Bresson studied for two years with the painter André Lhote, who imparted his obsession with Renaissance rules of geometry and composition. At the same time, the aspiring artist met André Breton and the surrealists. “I assiduously attended the surrealist meetings on the Place Blanche,” he wrote later. “Seated at the end of the table, too shy and too young to speak up.”

Surrealism, and the unusual angles and movement of Russian constructivism, informed Cartier-Bresson’s work throughout the 1930s. He bought his first Leica – “the extension of my eye” – and travelled to Africa, eastern Europe, Italy, Spain and Mexico.

Everywhere he went, Cartier-Bresson was on the look-out for what he called “the decisive moment”. In Livorno, a gust of wind created a surrealist picture by wrapping a curtain around a man’s head as he read a newspaper.

Behind Gare St Lazare, Cartier-Bresson took one of his most famous photographs: a man leaps across a pool of water, his image reflected in the pool beneath him and in the figure painted on the wall in the background, which is also reflected. Had Cartier-Bresson clicked the shutter a fraction of a second sooner or later, the photograph’s symmetry of four leaping men would not have existed.

Like the surrealists he associated with, Cartier-Bresson espoused communism. He went by “Henri Cartier” to hide his affluent origins. “If I entered the party, it was out of guilt,” he said in a 1986 interview. “You were supposed to be close to the people, and I was ashamed of being bourgeois.”

The leftist Popular Front government that came to power in 1936 gave every worker two weeks’ paid holidays. Cartier-Bresson’s photographs of the newfound leisure of the French working class show not only their joy but also the poverty of their rotting teeth and shabby clothes.

In New York, Cartier-Bresson became involved with the Soviet-inspired film-makers of the Nykino group. He convinced the French director Jean Renoir to hire him and worked as a “dogsbody” on three films in the late 1930s.

When the second World War started, Cartier-Bresson joined the film and photography section of the French army. He was taken prisoner by the Germans and spent three years in a labour camp, laying railway ties, making cement and working in an arms factory. Because of his pink cheeks and blue eyes, the other prisoners called him baby face.

Cartier-Bresson escaped on his third attempt and made his way back to France, where he joined the communist resistance. He travelled the world, but when asked years later what had been his most beautiful journey, he said it was the escape from prison camp.

In the immediate aftermath of the war, Cartier-Bresson took dramatic photographs of Oradour-sur-Glane, where 642 French people were massacred by the SS; of the citizens of Strasbourg burning Nazi flags and arresting Nazi officials; of a woman slapping the Gestapo informer who had betrayed her before a crowd in Dessau, Germany. It was not until 1946, Cartier-Bresson said, that he began to think of himself as a professional photographer: “Before, I did photography, but I always thought I’d become a painter.”

The following year, the Museum of Modern Art in New York organised an exhibition of Cartier-Bresson’s work, its first devoted to a French photographer. His success was such that Cartier-Bresson could easily have enjoyed a career as a photographic artist.

Instead, he became a beacon of modern photojournalism, cofounding the Magnum photo agency, which was organised as a co-operative owned by its photographers. To prevent publications cropping his photographs, Cartier-Bresson would demand that all be printed with the original black border. He also insisted that only his captions be used.


Important events
Cartier-Bresson witnessed the most important events of the next 20 years. On January 30th, 1948, he visited Mahatma Gandhi. Cartier-Bresson showed the Indian leader the catalogue from his MoMA exhibition. Gandhi paused over a photograph of a man looking at a hearse and exclaimed, “Death, death, death.” An hour later, he was assassinated. Life magazine published Cartier-Bresson’s photographs of Nehru announcing Gandhi’s death, and of his funeral and cremation.

In 1948-49, Cartier Bresson witnessed the overthrow of the Chinese Kuomintang by Mao Zedong. One of his best-known images, taken in Shanghai in December 1948, shows Chinese people who had queued outside a bank for 24 hours in the hope of exchanging devalued currency for gold. A dozen people were killed in the crush.

When Stalin died, in March 1953, Cartier-Bresson anticipated the ensuing cold-war “thaw” and immediately applied for a visa, becoming the first western photographer to work in Moscow for many years. He shot 10,000 pictures in 10 weeks. His images of queues in front of Moscow shops and Russian soldiers eyeing pretty girls in the street were snapped up by magazines around the world.

Cartier-Bresson believed a photographer should fade into the background. “One must approach the subject with the stealth of a wolf and velvet gloves; no hurrying. You don’t roil the waters when you go fishing,” he wrote in the preface to his 1952 book The Decisive Moment .

From the late 1960s, Cartier-Bresson gradually gave up photojournalism. In May 1968, he undertook a 20-month photo essay about France. Over decades he photographed many of the world’s leading writers and artists, including Beckett, Camus, Sartre, Matisse, Braque and Picasso. In later years, he concentrated on landscapes, family and friends, including his second wife, the photographer Martine Franck.

Cartier-Bresson never liked working in colour, though he sometimes made concessions for clients. “Colour for me should be reserved for painting,” he told Le Monde in 1974. “I find emotion in black and white. It transposes. It is an abstraction. It’s not ‘normal’.”

Cartier-Bresson returned to his first love, drawing. “My Leica sleeps all the time,” he wrote in 1988. He spent much of his time organising his archives for the Henri Cartier-Bresson Foundation, and published 20 or so books of photographs in three decades. “I earn my living selling photos to collectors, pictures I couldn’t sell when I was young,” he said in 1989. “It’s a little bit absurd.”


Henri Cartier-Bresson is at the
Pompidou Centre, Paris, until June 9th;
centrepompidou.fr