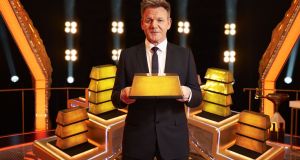 Most quizshows originate as inexplicable stress dreams. Recently, a television executive dreamed he had to balance bars of gold on a confusing roundabout/seesaw thing while the celebrity chef Gordon Ramsay watched. He was terrified.

What a show. Gordon Ramsay’s Bank Balance (Wednesday to Friday, BBC One)  has the perfect name, in that it explains both the concept of the programme and the motivation for the host’s involvement. Ramsay, as you know, now hosts 50 per cent of all programmes on television, and by 2030 he hopes to host them all. Peak Ramsay will coincide with peak oil.

Gordon Ramsay’s craggy facial features are bounded by so many lines it looks like he has several as yet unopened mouths, each trying not to swear

He has expanded far beyond his original remit as a bluff, foul-mouthed celebrity chef to engage in travel programmes and documentaries and quizshows. He is part of the cultural atmosphere. He stands there now, whatever the show, with his perfectly rectangular hair and craggy facial features bounded by so many lines it looks like he has several as yet unopened mouths, each trying not to swear. Caricatures of Ramsay are always destined to look photorealistic compared with the real thing, which is part of what makes him such a compelling television presence.

There are unwritten television rules about quizshows. Daytime quizshows are brightly lit, with primary colours and jaunty music, and are created with the care of people who know that anyone watching a quizshow during the day really needs to be dealt with gently.

In contrast, evening quizshows are darkly lit, with ominous action-movie soundtracks and sci-fi-influenced sets, and are created in the knowledge that everyone watching wants to feel like they’re actually watching Game of Thrones and not just Blankety Blank.

On each episode of Gordon Ramsay’s Bank Balance two friends, family members or lovers must acquire bars of gold by correctly answering Ramsay’s riddles. When the contestants get an answer wrong the gold bars sort of go off and turn red, much like gold does in nature. And, if you know anything about finance at all, you’ll know that a bar of gold is worth a lot more money than a bar of red. More fool you if you’ve been mining red.

On the other hand, balancing bars of red on a circular seesaw at the pleasure of a celebrity chef is as meaningful as much employment gets these days. (I’m reading David Graeber’s excellent book Bullsh*t Jobs at the moment, so this might be influencing my views.) The contestants must do this carefully, so as not to cause the seesaw to overbalance, tipping gold bars all over the floor for Ramsay to rub himself on. (We don’t actually see this, but I’m presuming that’s what happens.)

The trivia categories are culled from contemporary Leaving Cert subjects. Things like: “Animals”, “Astrology”, “Boybands”, “Kids’ TV” and “Australia”. And throughout it all Ramsay says completely normal things like: “If you want to win tonight don’t tip that board over!” He says it in the same tone of voice someone might say: “If you want to buy a house don’t eat avocados!” or “If you’ve nothing to hide you have nothing to fear!”

Anyway, the pseudoscientific randomness of Gordon Ramsay’s Bank Balance is also as good an explanation of high finance as you’re likely to find. I’ve read up on derivatives and futures and other financial instruments, but if someone asked me to explain them I’d still point at the circular seesaw of gold bullion featured on Gordon Ramsay’s Bank Balance and say: “Like this, except less useful and entertaining and overseen by actual sociopaths as opposed to pretend ones like Gordon Ramsay.”

Watching people ruminate over a multiple-choice exam was once considered the height of excitement. Nowadays it feels like reading a really long 19th-century novel

For the purposes of comparison, I tune into Who Wants to be a Millionaire? (Sunday, Virgin Media One), another avaricious quiz show at a later stage in its life cycle. If you’ve not watched it in a while, the original host, Chris Tarrant, has now emerged from his chrysalis in his final Jeremy Clarkson form. The ground of Tarrant/Clarkson’s panopticon swirls into illuminated pound symbols. The music has stopped seeming ominous and now evokes the familiar medicated jauntiness of the daytime.

Unlike in Gordon Ramsay’s Bank Balance, in which contestants run around yelling things while Ramsay glowers gleefully, here everyone remains seated, discussing their thought processes at interminable length as Clarkson’s jowls quiver glumly.

This format was, of course, developed before we were all in constant agitation due to a 24-hour news hellscape and the constant suction of the big data funnel (Twitter). At one time, though, watching people ruminate over a multiple-choice exam was considered the height of excitement. Nowadays it feels like reading a really long 19th-century novel.

Meanwhile, Clarkson has strange dreams in which he is a devil-may-care drivey man on the BBC’s flagship motoring show (Amazon shows don’t count). Sometimes this legacy intrudes on proceedings. In the final episode of this series, for example, a contestant correctly chooses “Joey” as the Friends character with seven siblings, hazarding the guess based, she says, on Joey’s Catholicism.

She has won money but frets about the political correctness of her reasoning. Clarkson soothes her with some things he knows about Catholics. “You know, they tend to have more children than people from…” He stops himself. “No, I’m getting myself in a pickle now… Are you allowed to think it these days?”

You can see, in his small, melancholy eyes, that he’s recalling the beforetimes and possibly thinking about how Matt LeBlanc replaced him on Top Gear. One minute he was assaulting an Irishman for not bringing him hot meats on the set and, the next thing he knew, political correctness was going mad and banishing him from the BBC. Sometimes nobody tells you that the rules have changed.

Thankfully, the rules of Who Wants to Be A Millionaire? never change. They have the familiarity of a church service (though not a Catholic one). So at least that must bring him some comfort. Also, he’s loaded.