Going Out: The best of what’s on this weekend

A round-up of the best nights out across the country, inicluding gigs by Little Green Cars, Colm Mac Con Iomaire, Mmoths and more 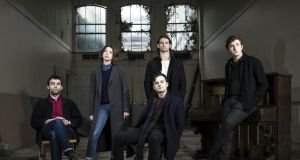 Notify
The White Horse, Ballincollig, Co Cork 8pm €15 021-4871388 Also Sat, Kerry
What do you get when you cross a concertina with serious jazz-inflected electronica and the subtlest of drums’n’bass? Notify, that’s what. Pádraig Rynne’s brainchild continues to gather momentum with their latest album (InConcept) and this brief tour.

Songs of the Damned: The Pogues Project
The Grand Social, Dublin 8pm €10 thegrandsocial.ie
Remember The Pogues, that motley collection of musicians in their heyday – raucous, poetic, punk rock and traditional. In this ambitious show (presented by Imram), the band’s wild, wilful music is transcribed into Irish by poets Liam Ó Muirthile and Gabriel Rosenstock. The songs are played by award-winning poet/singer Marcus Mac Conghail and other musicians, while designer Margaret Lonergan visually treats the evocative lyrics by Shane MacGowan.

Mmoths
District 8 Dublin 10pm €18/€15
It has taken Jack Colleran a while to get his debut album together but Luneworks shows that it was well worth the wait. Since Colleran first appeared , making beats when he should have been studying for his Leaving Cert, his sound has been worthy of attention. Luneworks is a beauty, a record of evocative electronic music full of resonance, emotion and depth. It shows that early potential has truly blossomed. Expect to hear a lot more from Colleran in 2016 and beyond.

Koma
Project, Waterford 11pm €10
The name at the top of the bill is Diego Krause, the Berlin producer with raw funk and soul in the groove . Releases for his Beste Modus and Unuson Wax labels show that Krause’s brand of raw, textured house is something to savour, while his performances at hometown clubs such as Watergate have attracted the tastemakers at Boiler Room and Mixmag Lab. Supporting Krause on his Irish debut will be Colm Mullally and Dean Mac Manus.

Concrete
Abbey Inn, Tralee, Co Kerry 10pm Adm free
The Concrete crew have thrown parties in various Tralee establishments for a while now. Tonight they return to the Abbey Inn with Dave Quirke. Part of the Tipperary Sweet Tooth collective, Quirke has played at Bedlam, Bastardo Electrico and other events over the past while. He is joined by Andrew Lyne and Sean Cummins.

Sense
Button Factory, Dublin 11pm €15/€12.50 facebook.com/secondcityUK
Secondcity is Chicago-born and London-based producer Rowan Harrington who has been responsible for superb housework over the past while. The Toni Braxton-sampling hooky I Wanna Feel (2014) introduced Secondcity to the sharp end of the pop charts. Since then he has toured a lot worldwide, recorded a couple of new EPs and remixed tracks for Carl Cox, Mendo and others. Support tonight from RTÉ Pulse DJ Dan Stritch.

Iarla Ó Lionáird and Steve Cooney
Set Theatre, Kilkenny 8pm €15 kilkennytradfest.com
The voice of Cúl Aodha singer and Inistioge resident Iarla Ó Lionáird gets better and better with each passing year. Hot on the heels of The Gloaming’s triumphant five-night residency in the National Concert Hall, Ó Lionáird sidles off for this altogether-different undertaking, in the company of the sublime Cooney on guitar and didgeridoo. Quite likely to be a rascally night of music and stories.

Ryan Keberle & Catharsis
Crane Lane Theatre, Cork, 9pm, adm free, cranelanetheatre.ie
Thirty-four-year-old New Yorker Ryan Keberle is one of the hottest names in jazz trombone with an impressive resume that runs from Wynton Marsalis and Maria Schneider to Beyonce and Justin Timberlake. His own group, Catharsis, is a powerful ‘chordless’ quintet of similarly sought-after musicians, including rising Chilean vocalist Camila Meza. Worth any ticket price, if there was one – as a free event, it’s unmissable.

High Treason: Roger Casement; Our Kind; No More Fun and Games
Dublin City Gallery, The Hugh Lane, Parnell Sq North, Dublin hughlane.ie
Featuring John Lavery’s monumental painting of Casement. Also, Alan Phelan’s short film Our Kind which imagines a future for Casement if he had not been executed. And in No More Fun and Games: Jesse Jones, who was recently chosen to represent Ireland at next year’s Venice Biennale, transforms the gallery into a cinematic experience addressing feminism in Ireland’s art, history and life.

What Courtney Love did straight after she left 1980s Dublin
7