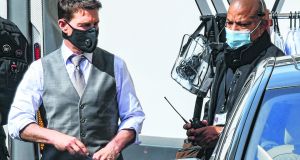 Tom Cruise (left) on the set during the filming of Mission Impossible in October in Rome. Photograph: Alberto Pizzoli/AFP via Getty Images

Actor Tom Cruise recently erupted at crew members on the set of Mission: Impossible 7 over a breach of Covid-19 protocols in an apparent effort to prevent further disruptions to a film whose production has already been delayed by the pandemic.

“We are creating thousands of jobs,” Cruise, the star of the film, can be heard saying in a leaked audio clip that is littered with expletives. “I don’t ever want to see it again! Ever! And if you don’t do it, you’re fired!” The recording was published on Tuesday by British tabloid The Sun and its authenticity was confirmed by two sources close to the film. One source said that Cruise had been speaking to members of the Mission: Impossible 7 crew about a breach in Covid-19 protocols on the set in London and that further details were not immediately available.

Cruise apparently became enraged after spotting two crew members standing together at a computer screen in violation of an on-set rule requiring people to stand about two metres apart, The Sun reported. Paramount Pictures declined to comment, and The Sun did not say when the recording of Cruise, 58, had been made. Reuters reported that the film-makers for Mission: Impossible 7 – the latest instalment in the 24-year-old series – arrived in London this month.

In February, production on the film was shuttered in Venice, Italy, amid a raging coronavirus outbreak in that country, Reuters reported. Production resumed in September and has since moved among Italy, Norway and Britain. Production was paused again in October after 12 crew members on a set in Italy tested positive for the virus, Variety reported.

The leaked audio is of Cruise addressing about 50 staff members at a Warner Bros film-production complex in Leavesden, north west of London, The Sun reported. The tabloid said that the actor wears a mask on the set and has been personally enforcing Covid-19 rules, an effort to prevent further delays in shooting.

In the leaked clip, Cruise told the crew that the production was the “gold standard” for Hollywood and that he had been speaking with studios, producers and insurance companies who were all “looking at us and using us to make their movies.” He said he would not accept any apologies for what had happened on the set, an apparent reference to the breach in Covid-19 protocol. “You can tell it to the people that are losing their homes because our industry is shut down,” Cruise said, adding an expletive. “It’s not going to put food on their table or pay for their college education.”

The sixth film in the series, Mission: Impossible – Fallout, was released in 2018 and took in $791 million (€648 million) in global ticket sales. It was also filmed in Europe, among other places, and its production was delayed after Cruise broke his ankle while performing a stunt in which he slams into the side of a building. – New York Times