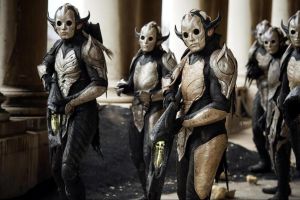 HHH Isn’t it interesting how quickly life goes back to normal after a massed attack by aliens? In both Iron Man 3 and Thor: The Dark World, the general public seem to have largely forgotten the most astonishing event in the entire history of the planet. Here’s Chris O’Dowd (when do you sleep, man?) having dinner in an elevated restaurant with scientist Jane Foster (Portman) as if the world didn’t nearly end during last summer’s The Avengers. He’s probably right to be so blasé. Minutes later, Jane, squeeze to the god of Thunder, is doing something weird among whirling vortexes in a distressed part of London. Shortly after that the Dark Elves of Svartalfheim begin tearing up eastern reaches of the city. Near-oblivion is now a weekly event.

There was some controversy about what was good and what was bad about Kenneth Branagh’s Thor. Sensible folk thought the god-out-of-Asgard stuff on Earth was an absolute hoot, whereas the mythical messing about in the astral plane came across like Masters of the Universe on Ice. More serious sorts felt the exact opposite.

In The Dark World, the stuff in Asgard is slightly sillier than before. Tom Hiddleston’s excellent Loki lurks in captivity. Anthony Hopkins continues to offer his bargain-basement Lear. Poor Idris Elba – a kind of eternal toll-gate monitor – still has the most uninteresting role in all the Marvel universe. Chris Helmsworth’s giant Thor drops by at weekends.

Happily, the jokey stuff on earth is every bit as funny as before. There’s a balance to be struck here. We love seeing the extravagant Thor in mundane surroundings, but send him down the pub too often and you risk turning him into a Fast Show creation. Here, he is allowed just enough silliness – strap-hanging on the tube, cramming into a small car, hanging his hammer on a coat-rack – to satisfy our comic needs, but not so much that he loses proper heroic status. This is very decent mid-ranking Marvel. We look to Captain America: The Winter Soldier with some enthusiasm.