The Transfiguration review: a transfixing subversion of the vampire genre 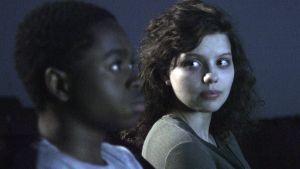 Eric Ruffin and Chloe Levine in ‘The Transfiguration’

Post-Twilight and True Blood, it’s not unreasonable to suggest that vampires need a little lie down in their coffins. Dead? Undead? We don’t care – they’re looking awfully damned tired.

The end of the vogue makes Michael O’Shea’s fiendish subversion of the genre all the more surprising. Not too far into this transfixing welcome reinvention, the young hero, a vampire-obsessed outsider teen named Milo, makes reference to Tomas Alfredson’s Let the Right One and George Romero’s Martin. Those films, particularly the latter, set the tone and cast a pleasingly discombobulating shadow across The Transfiguration.

As with Romero’s anti-hero, we’re left to ponder whether melancholic Milo (Eric Ruffin, a superstar in the making) – who we first see dispatching a man in a public lavatory, sucking his blood, and pocketing his cash – is an overly-keen fan-boy or a genuine monster.

The case for some class of personality disorder is carefully outlined: the boy keeps a killing diary and watches YouTube videos of slaughterhouses. He lives at home with his older brother, Lewis (Mozart in the Jungle’s Aaron Clifton Moten), an army veteran whose fraternal concern can feel like bullying and who has retreated from the dangers of the outside world. Their mother has recently killed herself. Their poor, primarily black New York neighbourhood is overrun by gangs and guns.

Against this, Milo seems like a decent, if confused fellow who goes to school and who touchingly befriends another outcast, Sophie (Chloe Levine), a self-harming white girl with a troubled home life. Together the pair visit Rockaway Beach, a location not yet recovered from 2012’s Hurricane Sandy, and make wistful, likely doomed plans.

Even in company, Milo’s isolation is palpable: “Do people ever tell you you don’t talk a lot?” he’s asked. “No, no one ever speaks to me,” Milo replies.

It’s not just the neighbourhood or the protagonist’s ethnicity. The Transfiguration maintains a strange disassociated gaze over socio-economic and psychological distress, an out-of-body sensation that recalls John Sayles’ The Brother from Another Planet or Boaz Yakin’s Fresh in its simultaneous worldliness and otherworldliness.