Maisie Williams stars as a schoolgirl in a tragic, quasi-Sapphic relationship 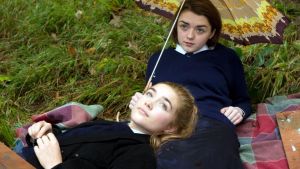 It is 1969 and hormones reign at an English girls’ school where spiky Lydia (Maisie Williams) and dreamy Abbie (remarkable newcomer Florence Pugh) enjoy a hair-stroking, quasi-Sapphic best-friendship. Their mutual bliss is threatened when Abbie confesses that she has lost her virginity. Her subsequent seduction of Lydia’s brother doesn’t help, nor does the discovery that Abbie is pregnant.

A tragedy finally separates the girls and Lydia faints. And then other girls faint. What is going on here? Director Carol Morley keeps us guessing about the ensuing epidemic: is this mass hysteria or is something more mysterious at work?

In common with The Duke of Burgundy, The Falling is a film that looks and feels as though it was made at the time of its setting. It is impossible not to think of similarly themed classics, notably Innocence, The Virgin Suicides and Picnic at Hanging Rock.

The film’s Englishness, however, sets it apart. We feel we may be looking at a sister school to Lindsay Anderson’s If.... In this spirit, there’s an underlying unruliness that feels rather more robust than the maidenhood explored in, say, Hanging Rock. Lydia’s troubled relationship with her hairdresser mother (Maxine Peake) and unsettling home life bring kitchen-sink grit to the otherworldliness and atmospherics.

But it’s that girl again – Maisie Williams – that walks off with the movie.

Review: Worth seeing. Which is not the same as saying it was worth making.