Review: The testimony of the airmen is what lingers most strongly in this documentary 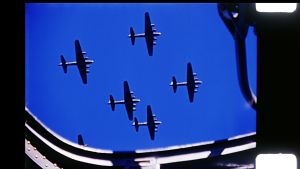 We have recently been spoilt with hitherto unseen footage from historical events. Coming a week after the extraordinary Apollo 11, The Cold Blue comprises stunning outtakes from William Wyler’s legendary 1944 documentary The Memphis Belle: A Story of a Flying Fortress. Reimagined as a drama in 1990, the documentary purported to show the last flight of the eponymous B-17. It didn’t quite do what it claimed, but it remains a classic of its type.

Erik Nelson, a hugely experienced documentary film-maker who has worked extensively with Werner Herzog, plays no such tricks with the viewer. The crew of the Belle are all dead, but he has assembled a replacement from surviving second World War veterans of the Eighth Air Force: one pilot, one navigator, one tail gunner and so on. The restored colour photography is stunning. It is, however, the testimony that lingers most strongly.

Over a lean running time, the film manages to answer an impressive array of questions. One man confirms that he was frightened every day. Another suggests that too many crew members got a little blasé once they’d flown 10 or 12 missions. All confirm that the sense of comradeship had an intensity that no other relationship could match. These events took up a short period in what are now very long lives, but they defined attitudes for decades to come.

The Cold Blue is edited in a lucid, unhurried fashion that takes its cues from the pilot’s testimony. Richard Thompson, the great guitarist and composer, brings pastoral elegance (for the scenes on English soil) and orchestral surges (for the battle sequences) to a predictably fine score.

We are left with a valuable record of an extraordinary period. The vibrant colour lends the images an immediacy that strips away the decades. But The Cold Blue also works well as a movie-movie of the old school; 40 years ago, it would have been counterbalancing the uncomplicated heroism of endless mainstream war films. Now, it has the forum pretty much to itself. Pay attention.