Star Wars: The Last Jedi new video – what we learned

Behind the scenes footage of the new Stars Wars movie has been released. It includes shots of Skellig Michael and scenes with the late Carrie Fisher, who played Princess Leia. Courtesy: Walt Disney Pictures / Lucasfilm 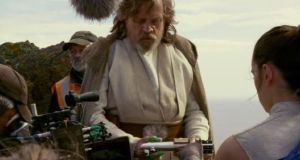 Is Rian Johnson’s The Last Jedi the most secretive Star Wars movie of the internet era? With fewer than five months to go until the mid-December release of the highly-anticipated new episode, we’ve had just a single teaser trailer to feast our hungry eyes on.

A vague picture of the exotic worlds and eccentric space cultures that might play a part in the new movie is beginning to emerge, but it’s at best, a half-seen, blurry image rather than the Ultra HD vision of knockabout cosmic fantasy many were hoping for.

We have no virtually no concept of why Luke Skywalker wants the Jedi to “end”, as revealed in April’s teaser, and little idea who Benicio Del Toro’s grungey-looking “DJ” is, even though it seems likely he’ll play a major part in events. We don’t even really have any great sense of the themes that will drive the new episode. Will it follow the path well-trodden by 1980s Empire Strikes Back – a vengeful attack from the dark side; a student learning the ways of the Force from a grizzled master; a shocking final twist? Or will it attempt to break new ground for this venerable old saga?

The Last Jedi panel at Disney’s D23 event in Anaheim this weekend added little to the picture, beyond confirming that John Boyega’s Finn is likely to fight Gwendoline Christie’s Captain Phasma at some point, and that Mark Hamill has clearly been told to say nothing if he can’t find anything nice to say about Johnson’s script. But the newly-released behind-the-scenes video that debuted does at least offer genuinely fresh footage from the production. Here’s what we found out after going through it with a fine tooth comb.

Johnson has previously described Canto Bight as a “playground for rich assholes,” with images published by Vanity Fair hinting at an exotic vision part-way between James Bond and Alice in Wonderland, populated by ornately-dressed elites of both alien and human heritage. This is the carefree 1 per cent of the Star Wars galaxy, whose extreme wealth presumably keeps them safe despite the ongoing Resistance-First Order conflict.

If so, this gilded utopia – exterior scenes for which were shot in Croatia – looks like it’s about to find itself dragged into the war. Johnson has suggested Finn and newcomer Rose, a lowly Resistance maintenance worker played by Kelly Marie Tran, will arrive on the planet for a secret mission.

Is that striking crystal fox merely a rich alien’s plaything? Are those smarmy, opulently-dressed toad-like creatures croupiers, or merely boho high-flyers? What’s certain is that wretched hives of scum and villainy such as Mos Eisley and Maz Kanata’s castle on Takodana no longer appear to have a monopoly on weirdness in the Star Wars saga.

The Last Jedi is all about family

Daisy Ridley, Boyega and Hamill take it in turns to hype up the freshness, originality and unexpectedness of Johnson’s script during the video. But might Carrie Fisher’s seemingly throwaway line – “it’s about family, and that’s what’s so powerful about it” - ultimately end up being more telling?

The original Star Wars trilogy and the prequels charted the Skywalker clan’s descent into infamy and back to redemption. But we don’t yet know whether the new films will continue with the same theme, or work to establish a new one. Does Fisher’s line hint that Adam Driver’s Kylo Ren – the last remaining Force-sensitive Skywalker scion, as far as we know - has his own path of redemption to follow?

Might other families begin to play a part? Some reckon Del Toro’s “DJ” might be Rey’s father, while Rose has a sister who’s a gunner in the Resistance. Then there’s Luke and Leia themselves: can we expect to see them reunited in The Last Jedi? If Johnson’s movie really is all about family, you’d assume that’s a given, especially as Hamill has moaned he didn’t get to see Han die.

She was pretty nifty with that staff in The Force Awakens, but blue-screen scenes in the new video show the wannabe Jedi comfortably taking on multiple opponents. Is she coming up against the Knights of Ren themselves, or merely fending off several stormtroopers? And why is she using her staff, rather than a lightsaber here? Do these battles take place before she has been properly trained by Luke, perhaps with Ahch-To itself coming under attack?

Perhaps the most spine-tingling moment in the video comes towards the end, when we finally see Rey with her blue lightsaber, adorned in what appears to be the full, hooded garb of a rather famous order of super-powered galactic gendarmes. If you marvelled at her rapid journey from zero to Jedi in The Force Awakens, it looks like Johnson is about to really make the jump to light speed in the sequel.

When it was first revealed that Luke Skywalker shares his hermit-like existence with a sentient tribe of alien creatures, there were fears that Johnson might be going all Return of the Jedi on us. But this first look at Ahch-To’s native Porgs confirms they are puffin-like creatures rather than some kind of hellish recreation of the Ewoks. What else do we know about them? Well, there have been rumours that they might be connected to the origins of the Force, which certain Star Wars fan sites have predicted will be revealed to Rey by Luke in the early chapters of The Last Jedi.

Given the magnificence of her costume - initially conceived as an alternate option for Kylo Ren’s garb - and the high-profile casting of Christie in the role, the chrome-plated stormtrooper captain only turned up surprisingly briefly in The Force Awakens. But the Game of Thrones star’s prominence in the behind-the-scenes video – the British actor has also been front and centre at recent fan conventions – suggests she will get more than a walk-on part this time. This is only right and proper, for Phasma – one of the coolest-looking baddies in Star Wars history – surely needs to take her revenge after being dumped down a garbage chute last time out. – (Guardian Service)