The official trailer for Spider-Man Homecoming. 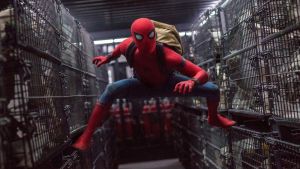 Among the first thing you hear in the latest reboot of Spider-Man is a variation on the theme from the little admired 1960s animated series. “Spider-Man. Spider-Man. Does whatever a spider can.”

It feels as if there is a declaration of intent here. Among the many virtues of this delightful film is an acknowledgement that these superhero things are essentially for children.

You don’t sell this many toys on the back of Michael Haneke movies. And Spider-Man is not only for children but also about children. The new film convincingly casts a 21-year-old as a 15-year-old. His friends seem younger still.

None of this means that the picture is facile, cheap or lacking in ambition. Spider-Man Homecoming is more satisfying than any film to date in the Marvel Cinematic Universe. Fun is still fun.

Among the many supposed Spidey essentials ditched (for now, anyway) is the exhausting origin story with all its associated guilt trips. As we learned in Captain America Civil War, Peter Parker, in the irrepressible form of Tom Holland, is already living super-humanly in Queens with Aunt May (Marisa Tomei). His “internship” with Tony Stark leads to one dangerous adventure, the gift of a high-tech suit and a testing period left to himself.

He is eager to get back with the Avengers, but Tony – occasionally present as Iron Man – suggests that he might try being “a friendly… erm… neighbourhood Spider-Man”.

There are a few such brief and punchy self-referential gags, but the film never gets bogged down in its own mythology. Unlike the increasingly busy Avengers-focused pictures, Spider-Man Homecoming is at home to leanness and efficiency.

After ploughing through Spider-Man’s extensive bestiary, the film-makers have settled upon the Vulture as this week’s villain. Originally suggestive of Donald Pleasance in an emu suit, this version, played by Michael Keaton at his most irritable, gets to wear a great metallic wing powered by glowing alien minerals.

Nobody will walk out whistling the big, computer-generated showdowns. The bad guy’s big schemes are as interchangeable as those of any bald Bond lunatic. But Keaton does have great fun as The Vulture’s alter-ego Adrian Toomes. Shafted by the capitalist machine, he becomes just the most malign of the adults trying to spoil Peter’s fun. Tony is the mostly absent father figure. Aunt May is the watchful font of concern.

Spider-Man: Homecoming takes place mostly in the kids’ world. Peter is honing his genius in a technical school whose intake reflects the delicious diversity of New York City. (Fewer people complained at the casting of Zendaya, African-American Disney star, as a potential love interest than the think pieces would have you believe.)

The perennially annoying Flash, now a much less threatening sort of bully, has become the excellent Tony Revolori from The Grand Budapest Hotel. Their interactions are funny, awkward and unforced. Imagine something much better than a hugely budgeted film adaptation of Saved by the Bell and you are halfway there.

Holland has grasped the notion that, at this stage of the story, Spider-Man can’t quite believe that he’s Spider-Man. As in the Sam Raimi version, his struggles with superpowers cutely mirror any teenager’s struggles with the aftermath of puberty. Jon Watts, the largely unknown director, shoots much of Spider-Man’s ascents from a great distance to emphasise the often-overlooked spideriness of the character. He is properly strange. But he’s also a confused kid.

What really sets the new film apart from most recent superhero pictures is the extraordinary warmth of its heart. Having a younger, livelier Aunt May – much admired by all the guys on the block – allows the relationship between her and Peter to take on the quality of a proper friendship. It’s her copy of The Beat’s Save it for Later that Peter plays before going on a date. She would surely approve of The Ramones’s Blitzkrieg Bop playing when Spidey does his rounds.

The late Joey Ramone would almost certainly be on board as well. Homecoming is a flashy, punchy blast that harbours no ideas above its station. And what a great last scene.