It Comes at Night: Brutally alone at the end of the world

Trey Shults dark, brilliant film about the suspicion of strangers gets us right inside the mind of the suspicious

The official trailer for 'It Comes at Night', written and directed by Trey Edward Shults. Video: A24 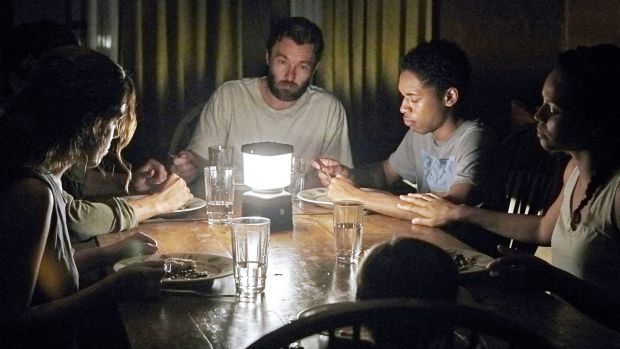 Film Title: It Comes at Night

“For what is a man profited, if he shall gain the whole world, and lose his own soul?” In his terrific second feature, Trey Shults, director of the family drama Krisha, appears to answer Saint Matthew’s rhetorical question with the expected answer. The dilemma here is grimmer. In an apocalyptic America, where cities have been laid low by a killer disease, gaining the whole world equates with mere survival.

The picture begins with an example of the arrangements Paul (Joel Edgerton) and his wife Sarah (Carmen Ejogo) have been forced to make with their own consciences. Sarah’s father has contracted a condition that – with its pustules and vomiting – seems not unlike Bubonic Plague. They solemnly take him out to the woods that surround their isolated home, shoot him in the head and burn his body. Greater compromises will follow.

Some short time later, Will (Christopher Abbott), a young stranger, blunders into their home. After much testing of his story, they allow Will to bring his own wife Kim (Riley Keough) and their young son Andrew (Griffin Robert Faulkner) to join their community. Inevitable tensions poison the fragile harmony.

Fantastically economical in its storytelling, It Comes At Night gives the audience enough dangling strands to hang each of the characters several times over. Will and Kim are not being entirely honest, but we can’t tell how dangerous their secrets are. Travis (Kelvin Harrison Jr), Paul and Sarah’s son, prowls about the attic and spies on the family’s mysterious guests. His nightmares may reveal truths about the nature of the disease and the future that awaits them all.

Like the recent Get Out, It Comes At Night (whose title is never fully explained) addresses current socio-political discontents. Here is a film about suspicion of strangers that gets us right inside the mind of the suspicious. But Shults’s film stews at a much lower temperature than Get Out. Brian McOmber’s shadowy woodland photography suggests Anthony Dod Mantle’s work on Lars Von Trier’s Antichrist. Much of the action takes place outside the frame. Many uncertainties remain after the credits roll.

It Come at Night is, however, a treat to ponder and deconstruct. Sombre nocturnes are rarely so entertaining.

Saint Sister: Where I Should End review – Easy listening in the best sense