Sorry to Bother You: The madcap comedy you need to see right now

Review: The buzziest movie of 2018 is a whirl of dazzling ideas and innovative visuals 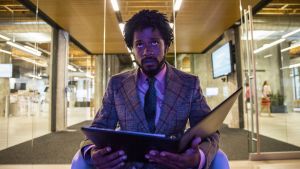 Film Title: Sorry to Bother You

Lakeith Stanfield is Cassius “Cash” Green, a flunking millennial reduced to living in his uncle’s (Terry Crews) garage and applying for a low-paid, entry-level position with a telemarketing firm.

It could be worse. Billboards and TV spots around Cassius’ neighbourhood – a dystopian, parallel Oakland – recruit for WorryFree, a company that promises a lifetime of prison labour. But hey: no more bills.

Cash struggles at work until a telemarketing veteran (Danny Glover) advises him to use his white voice, which turns out to be a very white voice indeed, courtesy of David Cross. He quickly comes to the attentions of the top-floor executives who sell munitions and slave labour on behalf of WorryFree.

As a “power caller”, his pay packet allows him to move into a well-appointed apartment with his artist-activist girlfriend Detroit (Tessa Thompson) and to the leave behind the troubles of his friends and co-workers, as they struggle to unionise against a rigged system.

It’s only when Cash is invited to a party with Steve Life, the bonkers chief exective of WorryFree (Armie Hammer at his most patrician) that he realises just how rigged it all is.

Boots Riley’s debut feature, the most buzzed about movie of 2018, is a whirl of dazzling ideas and innovative visuals. Phone connections see the hero crash into strangers’ living rooms and bedrooms.

There’s Afrofuturist art. There’s performance art. There’s a reality show called I Got the S#*@ Kicked Out of Me! Racial codes are merrily deconstructed: a scene in which Cash is asked if he has ever “popped a cap in someone’s ass” then is goaded into rapping for a white party would have mortified Stepin Fetchit. And that’s before Riley delivers an audacious twist.

Busy, boundless and brilliantly bonkers, this is the madcap Marxist adventure comedy you need to see right now.