Locke, an excellent performer and serious-minded director, became trapped by her involvement with Eastwood and bitter legal disputes 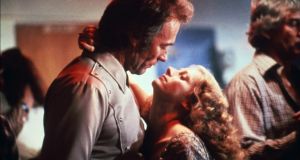 Sondra Locke was an actor, producer, director and talented singer. But it was her destiny to be linked forever with Clint Eastwood, whose partner she was from the mid-1970s to the late 1980s. Locke, whose death was announced on Friday, was a charismatic performer with a tough, lean look who starred alongside Eastwood in hit movies such as The Outlaw Josey Wales, The Gauntlet, Every Which Way But Loose (in which she sang her own songs – also for the sequel Any Which Way You Can) and Bronco Billy. But the pair became trapped in one of the most notoriously toxic relationships in Hollywood history, an ugly, messy and abusive overlap of the personal and professional – a case of love gone sour and mentorship gone terribly wrong.

Locke was already married when she met Eastwood – to a gay sculptor called Gordon Leigh Anderson, with whom she had a platonic relationship. She never divorced him and the marriage was still legal throughout her relationship with Eastwood, a fact which undoubtedly counted against her in their painful legal contest.

She became a test case and talking-point in America’s sexual politics debate when she sued Eastwood twice, once for “palimony” after their relationship acrimoniously ended, and then a second time for fraud, alleging that the project-development deal Eastwood subsequently set up for her was a trick, designed to buy off the palimony suit and which resulted in no directing jobs.

She claimed she had been thrown out of her house by the man she thought was the love of her life. It could well be that Locke was the victim of macho mind games, and her case was an eerie echo of the critic Pauline Kael who was suckered into (temporarily) quitting her job at the New Yorker by Warren Beatty for a similarly unproductive production deal.

And Locke was a serious-minded if underused director. Her 1986 fantasy-parable Ratboy (produced by Eastwood) was the subject of much critical bafflement, mockery and head-scratching, but it gained a certain cult status: the LA Times called it a fairytale with a cutting edge. It was a bizarre Elephant-Man-type story of a desperate woman (played by Locke herself) who discovers a hybrid creature in a dumpster, part rat, part human, and tries to exploit him/it commercially.

It could be that Locke was commenting on the nature of exploitation and that she herself knew what it was like to be hybrid: part sexy female lead, and part serious director whose talents couldn’t be acknowledged in a misogynist business. As for Eastwood, there was no doubting what  Locke thought. There was no “hybrid”. He was all rat.

Earlier, in Josey Wales, she was the young granddaughter of a woman, rescued from Comanches by the revenger Wales. The Gauntlet was a better showcase role for her: she is the prostitute with mob connections whom Eastwood’s hardbitten alcoholic cop has to accompany from Las Vegas to Phoenix to testify in court against the gangsters. She taunts her minder continually: “You really get off roughing up girls, huh?”

In the knockabout adventure comedy Every Which Way But Loose, co-starring an orangutan, she plays Lynn, the alluring but duplicitous country singer with whom Eastwood’s character falls in love. She sings her own stuff, including the song Too Loose (“Your love’s too loose and mine is too tight….”).

It isn’t often thought of an integral part of the Eastwood canon but this was one of his biggest hits and a vital part of his clout in the industry — that clout, in fact, which Locke thought he was going to use to sponsor her directing career. As for Eastwood, he appeared mildly bemused at the way the orangutan stole the show, but it was all playing sweet music at the box office.

In Bronco Billy, Locke had what was probably her best role opposite Eastwood: she is the disaffected heiress, Lily, who smokes cigarettes through a holder and loathes her scheming stepmother and who instantly gets a sexual frisson from her encounter with Billy (Eastwood) a former shoe salesman turned pseudo-cowboy who leads a travelling Wild West circus show. She gamely joins up as his assistant.

None of the Eastwood films really stretched her, and sadly when it came for her to play the famous singer Rosemary Clooney (aunt of George) in a TV movie in 1982, the songs were dubbed by ¨Clooney herself. Perhaps the veteran director Alan Rudolph gave her more of a chance in her final film, Ray Meets Helen, from 2017, a moody and elegiac film in which she is an ageing loner who forms a relationship with Keith Carradine’s ex-boxer.

Would it have been better for Locke if she had never had a personal relationship with one of Hollywood’s biggest male stars? Maybe. But her portfolio of potential couldn’t easily be fitted into any of the career paths mostly occupied by men. – Guardian

Brie Larson is sick of being interviewed by ‘white dudes’
8