‘I very much relate to that Peter Parker – he wears sweatpants’

‘Spider-Man: Into the Spiderverse’ producers on superheros, teamwork and Stan Lee 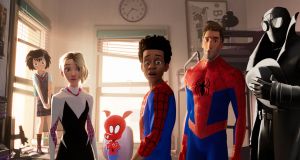 In 2011, when Spider-Man was resurrected in the Ultimate universe as a half-black, half-Hispanic teen named Miles Morales, jeers to the tune of ‘PC gone mad’ ensued. Fox News and conservative commentator Glen Beck weighed into the discussion. Outraged fans, having entirely forgetten Miguel O’Hara, the Irish-Latino hero of Spider-Man 2099, took to Marvel’s message board.

Spider-Man co-creator Stan Lee predictably became Miles’ earliest cheerleader, claiming that “Doing our bit to try to make our nation, and the world, colour blind is definitely the right thing.”

“Obviously with this movie we were really trying to honour the legacy of what Stan Lee and Steve Ditko created,” says Lord. “And how welcoming and inclusive they were. The whole idea behind Peter Parker was that he was a nerdy teenager from lower middle class Queens. He was a normal person that could be any of us. That was so new and different at a time when a lot of superheroes were billionaires or aliens or what have you. That message – this could be you – felt really strong to us.”

“Everybody can project themselves onto that suit,” adds Miller. “Stan Lee and Steve Ditko created a character who felt unqualified. And we can certainly relate to that.”

Minutes before I sit down with Lord and Miller, Spider-Man: Into the Spiderverse has been nominated for a Golden Globes.

It’s a deserving thumb up at the end of a turmultous couple of years for the filmmakers.

In the summer of 2017, Lord and Miller unexpectedly left the Star Wars spin-off Solo with just weeks left on its shooting schedule. Since then, rumours and unconfirmed reports have speculated that their Han Solo was – depending on whatever anonymous source is speaking – too comical or too gritty. Either way, LucasFilm replaced the pair with the Oscar-winning safe-pair-of-hands Ron Howard and Solo went on to become the franchise’s first box-office disaster.

Lord and Miller have subsequently written and produced The Lego Movie 2: The Second Part, a sequel to their 2014 hit, in addition to presiding over Spider-Man: Into the Spiderverse. The film, in stark contrast to a certain space opera, has received a rapturous reception, with many critics hailing the film as the best superhero movie in years.

The Spider-Verse pivots around Miles Morales (voiced by Shameik Moore), a Brooklyn schoolkid who is bitten by a mutant spider while creating a grafitti mural in an abandoned subway tunnel alongside his impossibly cool Uncle Aaron (Mahershala Ali). Confused by his newfound abilties, Miles seeks out Peter Parker’s Spider-Man just as an interdimensional rift kills the latter, and opens a gateway for various alternate-universe Spider-Men. Or more accurately Spider-things.

The fun, finished film swings into cinemas as a breakneck 117minutes, as whittled down from a once unwieldy 150-page – or two-and-a-half hour – screenplay.

“We didn’t quite realise the door that we had opened,” says Miller. “We started going through the Spider-Verse wondering which characters would look the most insane next to each other.”

“It started with us wanting to tell the Mike Morales story,” says Lord. “And everything grew around that. The idea of him and an older Peter Parker as a mentor who wasn’t at all capable of being a mentor. That was always the central idea. But once that door to the multiverse was opened, we had to try some fun stuff. It could have gotten even larger but then we would have lost focus on Miles.”

Miles does, however, have to share a good deal of screen time with the older, sloppier, now divorced deadbeat, Peter B Parker (voiced by Jake Johnson), a carefully constructed amalgamation of the Sam Raimi’s rendition of Spider-Man, newbie Tom Holland, and the 1967 friendly neighbourhood cartoon series.

“I very much relate to that Peter Parker because he’s about my age,” says Lord. “He’s tired. He’s not in perfect physical condition. He wears sweatpants.”

“I’m not sure why more superheroes don’t wear sweatpants,” says Miller. “They give you give you a lot of mobility. They’re warm.”

Lord and Miller were plainly passionate about their latest project and it shows in the spectacular visuals, a marriage of animation styles that emulate what it might be like to live inside Spider-Man artist Sara Pichelli’s original illustrations. Miller and Lord can walk you through every lovingly detailed component of the movie: what the colourist did,  how the lighting was achieved, the sound design.

“It was a very groundbreaking process that involved both hand-drawn 2D and 3D animation. All sorts of new software was created to render things with half tone dots. Then all the line work was drawn by hand, so each frame would look like a painting. It took an incredibly long development process to figure out how to actually do that. Even with the software, it was really hard. You get four or five secionds done in a week with most CG animation.  We could only get one second of animation in a week. But what was really cool was that everybody on the crew was so excited to be working on something they really believed in that they worked late nights and weekends. We’d talk to crew members and they’d say this feels like nothing I’ve ever worked on before”

“Of course, they hadn’t slept in three days so they might not have been in their right minds when they said that,” adds Miller.

Now aged 43, Miller and Lord met in the 1990s at Dartmouth College, where they each had a column in the school newspaper and each dabbled with short film and animation projects. They were only vaguely aware of each other until Miller accidentally set fire to Lord’s girlfriend’s hair. Since then, they’ve been a package deal.

“We’re really only coming to terms with that now,” jokes Miller. “We had a six-month lease when we moved to Los Angeles. I don’t think we had the most confidence in us in the world.”

“It’s all been accidental,” says Lord. “It has worked out well for us because we have a lot of respect for each other and very similar sensibilities and values. We started at university and we were making our own films but we were helping each other out. We came up to Los Angeles and people assumed we were a team. And we’ve never gotten around to correcting the record.”

They quickly found work: following a two-year development deal at Disney animation, they created the short lived MTV animation, Clone High, wrote two episodes of How I Met Your Mother, and directed the pilot for Brooklyn Nine-Nine. In 2003, they were approached to make Cloudy with a Chance of Meatballs. After a year, they were fired from the project, then rehired on what would mark their directorial debut.

“To us it doesn’t matter if we’re doing animation or live action,” says Lord. “At the end of the day we’re just trying to tell a story that engages us emotionally and that makes us laugh. We want to feel like we’re doing something new. Audiences are craving originality. Or anything that feels like something they haven’t seen 400 times before.”

I tell them about watching Spider-Man: Into the Spiderverse in a packed cinema and the audible response to Stan Lee’s cameo in the film. Lee has a long history on cameo appearances in superhero movies that are based on characters he either created and the makers of Avengers: Endgame have already revealed that the comic book legend had recorded his cameo for that film before his death last month. Still, without giving anything away, Lee’s posthumous appearance in Spider-Man: Into the Spiderverse will be hard to top.

“Our film owes everything to Stan and Steve (Ditko) so we wanted to make sure that the cameo that we did wasn’t just another tossed off cameo,” says Lord. “We wanted something inspiring and funny that honoured his legacy. People are always happy to see him. He’s like an old friend. And now it has taken on a whole other level of poignancy.”

Spider-Man: Into the Spiderverse opens on December 12th

How I learned to love Seamus Heaney’s poetry
2

Great reads: 20 books to unwind with this summer
7