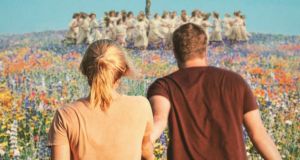 Bring on the dark: Florence Pugh and Jack Reynor in Midsommar

MIDSOMMAR ★★★★★
Directed by Ari Aster. Starring Florence Pugh, Jack Reynor, William Jackson Harper, Vilhelm Blomgren, Will Poulter
Dani (Pugh) is already struggling with a seriously ill bipolar sister and her indifferent boyfriend Christian (Reynor), when a horrifying murder-suicide claims the lives of her entire family. Feeling guilty, Christian reluctantly invites Dani to join him and his friends Josh (Harper) and Mark (Poulter) and Pelle (Blomgren) on a trip to the remote Swedish commune where Pelle was raised. Upon arriving in Halsingland where, in keeping with the title and geography, the sun never sets, the friends are given hallucinogens and asked to take part in a nine-day ritual held once every 90 years. Fans of The Wicker Man or indeed, any folk horror, will know that no good can come of this sojourn. Following on from last year’s Hereditary. Aster’s trippy second feature confirms him as the most fascinating genre auteur around. 16 cert gen release, 147 min TB Full review

You have to feel for the film-makers. Arriving after the much-loved Spider-Man: Homecoming and its buzzier, Oscar-winning animated cousin, Spider-Man: Into the Multiverse, the eighth Spider-Man film since the turn of the millennium is already facing something of a Sisyphean task. The final official film in Marvel Phase Three feels awfully minor after the grandiloquence of Avengers: Endgame. But Far from Home’s lack of narrative sophistication is often offset by its splendid cast. Holland’s Spider-Man maybe the most charming screen incarnation to date. The British-born actor has restored the fun that was leeched out of the franchise during the po-faced Andrew Garfield years. Zendaya, who does more with MJ than anyone might have reasonably thought possible, is never less than magical. 12A cert, gen release, 129 min TB Full review

Strap yourselves in. Writer-director Gonzales goes the full De Palma with this delirious magic giallo set against the world of gay 1970s porn. The spirit – and that must be the right word – of De Palma’s Phantom of the Paradise casts a long, camp shadow. Paradis is brittle, unpredictable softcore auteur Anne Pareze, a pinch-penny boss, an on-set tyrant, and a mooning ex-lover who obsesses over her film editor (Moran). When her staff start getting bumped off my a mysterious grotesque with a gimp suit and switchblade-dildo, Anne incorporates her encounters with investigating officers into the “dramatic” scenes in her films. One encounter with the law turns up a vital clue: a feather belonging to a cryptozoological blind bird that lives in a remote, fairytale forest. This is proper, unbridled, fever-pitch cinema. In common with it’s heroine (or anti-heroine), it’s grand, unapologetic and more than a little trashy. 18 cert, QFT, Belfast; Triskel, Cork; 102 min TB Full review

Yesterday, a musical fairy tale penned by Richard Curtis and directed with verve by Boyle, begins with a classic sci-fi “what if?” Jack (Patel), is a charming singer-songwriter struggling to find an audience in his native Clacton-on-Sea, despite the best efforts of his hard-crushing schoolteacher chum and part-time manager (James). Following a disastrous appearance at a music festival, Jack is on the verge of packing away his guitar for good when, following a mysterious worldwide blackout, he realises that he is now the only person who can remember The Beatles. One demo later and he’s on tour with Ed Sheeran (who proves a good sport) and under the thumb of a steely American agent (McKinnon, going full panto villain). Patel has a wide-eyed charisma, James, although underused, is a delight, and the earnestly covered music ensures this is a magical mystery tour worth boarding. 12A cert, gen release, 116 min TB Full review/preview

Yes, you do need another doc on the moon landing. Miller incorporates newly discovered 70mm footage into a film that tells the story from lift-off to splashdown with a careering energy that no previous documentarian has managed. Clocking in at a tidy 90 minutes, laid out in ruthlessly linear fashion, the film plays like one deep breath nervously exhaled. It’s also eye-wateringly beautiful to behold. There is little new information, but that scarcely matters. A classic. Club, QFT, Belfast; Cineworld/IFI/Light House, Dublin, 90 min DC Full review