Apollo 11: An energetic thrillride from liftoff to splashdown 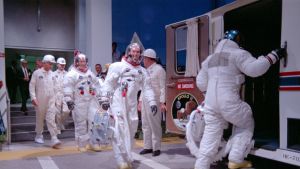 Those with hard hearts will wonder whether there is anything left to learn about the first moon landing. Those with harder hearts may demand that any new documentary on the subject come up with, say, half a dozen unexpected revelations.

Todd Douglas Miller’s Apollo 11 doesn’t do that. Indeed, the most thrilling part of the film – the race to touchdown before the fuel runs out – was also the highlight of Damien Chazelle’s recent First Man. After 50 long years, the drama owned that scene just a few months before the documentary premiered.

It says something about both filmmakers’ gifts that, watching doc and drama, it is hard to repel the suspicion the module is going to plonk fatally into a crater as the gauge hits zero. (Spoiler alert; it doesn’t.) Miller’s contribution is to tell the story from liftoff to splashdown with a careering energy that no previous documentarian has managed. Clocking in at a tidy 90 minutes, laid out in ruthlessly linear fashion, the film plays like one deep breath nervously exhaled. It’s also eye-wateringly beautiful to behold.

Okay, there is something new here. While researching with Nasa and the National Archives and Records Administration, Miller came across previously unreleased 70mm film from the launch and the recovery. Restored with great care before digital scanning, the footage provides the documentary with a stunning opening. Huge hyper-real cinematic images that, in the early shots of Cape Canaveral, make something fantastic of the ordinary people firing off Instamatics and queuing for sandwiches replace the fuzzy, distancing news footage familiar from so many earlier documentaries.

As time passes, we become ever more aware of how, treating President Kennedy’s grand ambition with the respect usually accorded to prophecy, Nasa got to the moon years – possibly decades – earlier than once seemed feasible. Everything about the surrounding America now seems ancient. Men are wearing hats. Coke still comes in the old cans with the diamond pattern. Most jarring of all to modern eyes, every surface in the control centre finds space for a large, often-overflowing ashtray. You would be as likely to find cockfighting in a similar space to day.

In contrast, the operation itself still seems strikingly modern. After all, following Apollo 17 in 1973, no later moon landings came along to show us how these things would look in a less analogue world. This is still how you do such things. It’s as if the arms industry stopped making guns after the musket.

None of these conclusions are foisted on the audience. Miller employs no voice-over, commissions no new interviews and imposes only sparing text on the screen – accompanied by rudimentary animations – to explain the technical challenges. Delightfully, Matt Morton’s excellent, largely electronic score uses instruments that were available in 1969. One imagines him burrowing through instruction manuals for rudimentary synths obsolete when Kraftwerk were still playing the flute. Brief, zippy flashbacks, illustrating the three astronauts’ early lives, do little to impede the film’s clattering forward momentum.

It doesn’t do to be too nostalgic about an era when social and racial injustices were more common than they are today. But it chills the blood a little to hear Richard Nixon’s voice congratulating the astronauts and then going on to deliver a woolly, but still convincing, address that claims the achievement for all mankind. Obviously, we know they only went there to troll the Soviets, but it’s nice that, in a more nuanced political time, the President had the decency to pretend otherwise. That’s the unlovely Richard Nixon we’re talking about! Imagine if…

Oh, never mind. Let’s leave that man out of it for once.

Life after Keelin: ‘Everything else up to that one bad thing was amazing’
8