‘We had it licked. Now America is the idiot cousin of Europe’

Erik Nelson on his documentary about the bombing of Germany, and the resonances today 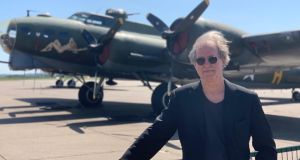 You wouldn’t mistake Erik Nelson for a layabout. A hugely chatty, endlessly friendly man in the senior stages of middle age, he has been a producer and director of documentaries since the 1980s.

“How do things ever start?” Erik Nelson muses. “I had a crazy idea: what colour footage of World War II airplanes exists in the archives. I have been obsessed with them since I was a kid. I happened to know someone who works for billionaire Paul Allen. He was also obsessed, but he’d also got a hangar full of aircraft. Maybe he’d put up some research money.”

You wouldn’t mistake Erik Nelson for a layabout. A hugely chatty, endlessly friendly man in the senior stages of middle age, he has been a producer and director of documentaries since the 1980s. His collaboration with Werner Herzog delivered such classics as Grizzly Man and Cave of Forgotten Dreams. There have been films on Harlan Ellison, JFK, Anne Frank and the death penalty. He knew to keep his ears open when Allen, co-founder of Microsoft, helped him open up the archives.

“I was being walked through the collection,” he remembers. “They were saying: ‘There’s colour footage of Kamikazes. Here’s the stuff from Okinawa. And here are the outtakes from The Memphis Belle and there’s…’ I stopped her and said: ‘What do you mean?’”

Released in 1944, William Wyler’s The Memphis Belle: A Story of a Flying Fortress followed the final mission of the eponymous B-17 Flying Fortress. Some famous liberties were taken with the truth, but the picture remains an untouchable record of the Allied bombing of Germany. Nelson immediately saw the potential for a companion piece.

The Cold Blue gathers together the newly uncovered footage and adds interviews with a few surviving crew members from other aircraft (all those from Memphis Belle are dead). His researcher came up with the clever wheeze of assembling a composite crew – one from each position – to offer a complete picture of the experience. The men prove thoughtful, considerate and humorous. I wonder what most surprised Nelson about the interviews.

“Two things surprised me. Firstly, the most dangerous parts of the mission weren’t over Germany. It was forming up the planes before heading across the channel,” he says. “The second thing was that, of the machine gunners we interviewed, not one of them even hit a German plane, never mind shot one down. I got to show the film to one who flew 53 missions. And he said the same thing. Do you know who that guy was? Norman Lear. ”

Lear, the creator of such US TV shows as All in the Family and Sanford and Sons, is not in the film, but he helped Nelson with endless insights into the unimaginable pressures the airman endured. They had a 50-50 chance of making it through the missions – initially 25, later arbitrarily increased – that constituted a tour.

The psychology of this is fascinating. That short period must have a wildly disproportionate influence on what are now very long lives. Put the missions together and they constitute just a few weeks.

“It’s a big haunt,” Nelson says. “That does hang over their entire lives. Most go to reunions. Norman Lear didn’t. He kept in touch, but his life wasn’t defined by it. Some of them dealt better with the traumas than others. But it did seem like yesterday to them.”

There is an intriguing insight at the beginning of the film. We assume that young men are drafted into wars because they are fitter and more robust than older folk. That’s true. But the pilots, navigators and gunners felt that something else was going on.

“They do say that,” Nelson ponders. “They’d say: ‘No wonder they get young guys; old guys wouldn’t do this.’ Everyone talked about how young and foolish they were. They didn’t realise what they were doing until they were in the middle of it all.”

The Cold Blue does feel like a summation of Nelson’s interests so far. He has always been obsessed with the war. He has always admired Richard Thompson, who composed the lovely music, and he sees the film as – in oblique fashion – exercising his interest in time travel. “That all came together in The Cold Blue,” he says.

Actually born in Hollywood, California (the hospital is now one of the Church of Scientology’s bossiest buildings), Nelson began in pop videos before when they still called music promos. TV and documentary features than followed. Cineastes will, however, be most intrigued by his several collaborations with Werner Herzog. We’ve seen the great German director looking difficult in documentaries on the making of Fitzcarraldo. Am I wrong to believe he might be hard work?

“I found him surprisingly easy as a collaborator,” he says. “He is very open to new ideas. In Cave of Forgotten Dreams it was my idea to do it in 3D. I took him and Harlan Ellison to see Avatar. That was my company party. It was the best party ever.”

The notion of taking Harlan Ellison, famously awkward science fiction writer, and Werner Herzog to a James Cameron flick fairly addles the brain. Of course, producers do have to be talent whisperers.

“I always say with Werner it’s like trying to get a cat to eat,” he says. “If you stand over the food it won’t eat. If you put the can down and walk away he will circle and circle and then eventually bite. Ha ha!”

Americans are good at that sort of thing. Just look at how they organised the war. The Cold Blue is interesting on the way the US soldiers and the British public interacted. Some two million “yanks” descended on a country that was a lot less familiar with outsiders than it is now.

“There is a connection to where we are today,” Nelson says. “The British pilots in the Lancasters fought inadvertently to form the European Union: a political alliance where this would never happen again and we don’t piss the Germans off.”

The Americans were so much more foreign and glamorous then. The country seemed that bit farther away from the old world.

“Yeah, we had it licked in America for a while,” Erik sighs. “Now it’s like America is the idiot cousin of Europe.”

He goes on to mouth the words “he who shall not be named”.

There really is no escape.