Yesterday: A musical fairy-tale set in a world with no Beatles

Review: This Danny Boyle/Richard Curtis comedy is a magical mystery tour worth taking 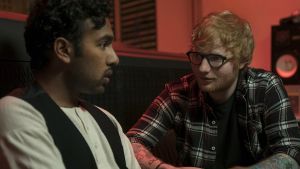 Himesh Patel and Ed Sheeran in Yesterday. Will we hear a medley of best-loved Beatles hits in this movie? You know the answer.

In 2011, Mindy Kaling penned an essay called Flick Chicks for the New Yorker that ought to be required reading for writers of romantic comedy.

“I regard romantic comedies as a subgenre of sci-fi, in which the world operates according to different rules than my regular human world” wrote Kaling. “For me, there is no difference between Ripley from Alien and any Katherine Heigl character. They are equally implausible. They’re all participating in a similar level of fakey razzle-dazzle, and I enjoy every second of it.”

We can’t know if Richard Curtis (Four Weddings and a Funeral, Notting Hill) read those words but two years after Kaling’s article appeared, he wrote and directed the underrated About Time, a temporal-jumping rom-com to end an unlovely run of scripts stretching back to Bridget Jones: The Edge of Reason and Love Actually (yes, it’s a bad film; please park your pathological nostalgia).

In this hybrid spirit, Yesterday, a new musical fairy-tale penned by Curtis and directed with verve by Danny Boyle, begins with a classic sci-fi “what if?”

Jack Malik (Himesh Patel) is a charming singer-songwriter struggling to find an audience in his native Clacton-on-Sea, despite the best efforts of his hard-crushing schoolteacher chum and part-time manager, Ellie (Lily James), and various annoying pals.

Following a disastrous appearance at a music festival, Jack is on the verge of packing away his guitar for good when, following a mysterious worldwide blackout and a collision with a bus, he wakes up in hospital with fewer teeth. More importantly, he comes to realise that he is now the only person who can remember The Beatles.

One demo later and he’s on tour with Ed Sheeran (who proves a good sport) and under the thumb of a steely American agent (Kate McKinnon, going full pantomime villain).

Will imposter syndrome get the better of Jack? Will he realise that Ellie has been waiting for him to make a move? Will we hear a medley of best-loved Beatles hits? You likely know the answer to all of these questions, but that does not diminish the charms of Yesterday.

Himesh Patel has a wide-eyed charisma; Lily James, although underused, is a delight, and the earnestly-covered songs ensure this is a magical mystery tour worth boarding.

A Beautiful Day in the Neighborhood: A tremendous film a great young director

Review: Story of the relationship between a cynical journalist and a celebrity