Review: The film, directed by the former child actor, is stuffed with good dialogue 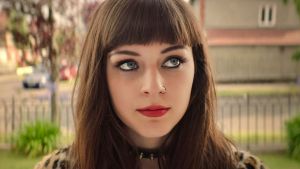 Hugh O’Conor, making his debut as a feature director, and Paul Murray, moving from novels to screenplays, aren’t tearing up much new ground in this charming comedy – in which the spirit of John Hughes haunts middle-class Dublin – but Metal Heart is so stuffed with good dialogue spoken by good actors that the familiarity hardly matters.

Indeed, the ease with which tropes from American high-school comedy translate to contemporary Irish suburbia says something worth attending about how Ireland has changed. The film would have made a lot less sense 20 years ago.

Murray has happened upon a neat warring-sisters conceit. Emma (Jordanne Jones) is a grumpy goth who dreams of musical success with her equally pitch-black boyfriend Gary (Sean Doyle). Chantal (Leah McNamara) leans more towards the cosy end of the spectrum.

Currently working in an ice cream parlour, she has saved enough money to start a career as “an influencer” (there aren’t enough inverted commas in the world). Their worlds get up-ended during a busy summer alone in the family home. Chantal does in her neck. Emma starts an uneasy relationship with the older louse next door (the ubiquitous Moe Dunford). Gary wars with his unpleasant stepfather.

Arriving at a time when the world seems in a permanent squabble with itself, Metal Heart offers a welcome heap of generosity. The temptation to reduce Chantal to an empty shell or oversell Emma’s maverick status is resisted.

As the tensions lessen the film does lose a little of its energy. Order is less amusing than disorder. But the actors never cease to engage. A prize winner at last year’s Galway Film Fleadh, Jones builds on her more introverted turn in I Used to Live Here to display impressive range. McNamara gets to rage amusingly.

The lads should, however, not be overlooked. Heffernan is hilarious as young celebrant at the Church of O’Carroll Kelly. Doyle does great work with even the least promising lines. “You know I have chess club on Wednesday!” the Goth petulantly yells. I laughed.