Shazam! The tangled history behind a lost superhero 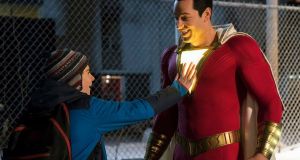 With one Captain Marvel already flying high on the silver screen, Brie Larson’s character is about to be joined in cinemas by the first hero to bear that name.

The latest DC Comics Extended Universe movie is Shazam! and it’s pitched as a cross between Superman and Big. An apparent course correction for a troubled film franchise, it tells the story of Billy Batson, a young orphan granted a magic word that transforms him into an adult superhero. It looks to be a bright, light-hearted tale belying the tangled legal history behind one of comics’ oldest names.

The character now called Shazam dates back 80 years to the golden age of comics. It was late in 1939 when the original Captain Marvel arrived in a comic-book thunderbolt, and already the skies of America’s popular imagination were thronged with brightly clad heroes.

Only a year earlier Jerry Siegel and Joe Shuster (both the 23-year-old sons of Jewish immigrants) had sold a story called Superman to National Allied Publications for $130. Debuting in Action Comics No 1, Superman became a smash hit, regularly selling half a million copies and going on to star in a nationally syndicated newspaper strip and a national radio programme.

“Give me a Superman,” circulation manager Roscoe Fawcett told creators CC Beck and Bill Parker, “only have his other identity be a 10-or-12-year-old boy”

The fledgling comics industry was a wild west back then, and Superman spawned a multitude of imitators. In those freewheeling, pre-billion-dollar franchise days, publishing houses would pop up, rip off whatever was selling, pump out knock-off characters, and – if necessary – vanish at the drop of a cease-and-desist.

Superman’s publishers – Detective Comics (also home to Batman), trading with its sister companies National Allied Publications and All-American Publications as DC Comics – took swift legal action against perceived plagiarism. Wonder-Man was created by Will Eisner, and debuted in Fox Publications’ March 1939 Wonder Comics No 1. DC Comics sued, and that was the end of Wonder-Man. Another new imprint, Fawcett Comics, chanced their arms with Masterman, until a threat from DC finished him off too.

“Give me a Superman,” circulation manager Roscoe Fawcett told creators CC Beck and Bill Parker, “only have his other identity be a 10- or 12-year-old boy.”

Whiz Comics No 2 (there never was a No 1) hit the news-stands, and Captain Marvel, in his red union suit and white cape, arrived in lightning and thunder.

When Superman first appeared, he was – behind meek and mild journalist Clark Kent’s Harold Lloyd glasses – a rough-and-ready New Deal Democrat who saw no wrong in throwing a wife-beating thug through a wall. The vigilante Batman thought nothing of knocking an enemy into a vat of acid, even if pipe-smoking millionaire Bruce Wayne regularly took drinks with the Police Commissioner. Captain Marvel, though, was a different, more innocent form of empowerment fantasy.

All superhero stories are about wish-fulfilment, but Captain Marvel made that notion literal, especially at a time when comics were actually read by children. In a story that reads uncomfortably now, young Billy Batson, defined for the most part by his cartoonish black-dotted eyes and his yellow-collared red sweater, is lured one night on to a deserted subway train by a mysterious stranger.

The train transports Billy to the Rock of Eternity, a sinister, cavernous chamber decorated on either side by monstrous statues that represent – and contain – the Seven Deadly Sins. Before Billy, on a throne of stone, sits the ancient wizard Shazam, above whom, by a fraying thread, hangs a Damoclean boulder. The wizard orders Billy to call out his name: “Shazam!”

The ensuing lightning flash grants Billy the powers of Solomon, Hercules, Atlas, Zeus, Achilles and Mercury. The wizard goes to his reward, and Billy becomes an adult superhero, one bearing a strong resemblance to matinee idol Fred MacMurray.

Captain Marvel would be the most popular superhero of the 1940s, outselling Superman and becoming the first superhero to be adapted for cinema. Billy Batson became a cub reporter and “The Big Red Cheese” (originally an insult from Captain Marvel’s arch-enemy, Doctor Sivana) soon found himself the head of a franchise. His female spin-off, Mary Marvel, predated Supergirl by nearly two decades, and Captain Marvel Junior’s quiff and cape would prove an influence on lifelong aficionado Elvis Presley. John Lennon was a fan, too, and would reference Captain Marvel on the Beatles’ White Album.

It was only when DC Comics’ 1941 efforts to launch a live-action Superman serial with Republic Pictures fell apart that they finally took notice of Captain Marvel. DC already had a Superman film deal with Fleischer animation studios and Paramount Pictures, and it turned out this precluded a live-action serial. Republic went with Fawcett instead, and a 12-chapter Captain Marvel serial starring Tom Tyler soon hit movie theatres.

Claiming Captain Marvel was a copy of Superman, DC Comics sued Fawcett for copyright infringement. The case trundled on for 12 years (the second World War slowing everything down). With comic sales dwindling as the superhero craze faded, Fawcett eventually gave up the ghost in 1953, closing its comics division.

In Britain this caused a problem for publisher L Miller, which had enjoyed a nice little earner in Captain Marvel reprints. As supply dried up, it switched to home-grown stories by writer and artist Mick Anglo, featuring blond-haired, blue-suited Marvelman, and his boy reporter alter ego, Mickey Moran.

Marvelman would probably be a minor, forgotten footnote in comics history had not a boy in Northampton been a fan. Alan Moore would, three decades later, in 1982, ask the then just-about-interesting question: what if superheroes lived somewhere approximating the real world? Moore’s dark, deconstructed Marvelman (later Miracleman, when Marvel Comics threatened legal action) helped, alongside Moore’s Watchmen, and Frank Miller’s The Dark Knight Returns, to change comics, and Moore would later say it was for the worse.

A less memorable footnote is MF Enterprises’ copyright-baiting 1966 Captain Marvel, an alien robot that could detach its head and limbs by shouting “Split!” That was shut down lickety-split when Marvel Comics objected to the word “Marvel” and DC didn’t like the look of supporting character “The Bat”.

In 1972 DC Comics, now run by editors with fond memories of Captain Marvel, licensed the dormant character from Fawcett, only to realise – in something of a karmic irony – they couldn’t market him as Captain Marvel, as the trademark on that name had been snaffled in 1967 by DC’s upstart rivals, Marvel Comics.

DC was forced to advertise the character as “Shazam” (a front-page blurb reading “The Original Captain Marvel” didn’t survive a Marvel cease-and-desist letter). Marvel’s own use of the name applied first to an alien warrior called Mar-Vell, and eventually to his female spin-off Ms Marvel. That character is currently shooting for the stars in the Avengers prequel Captain Marvel, and its star, Brie Larson, looks set to spearhead the next phase of Marvel’s seemingly unstoppable film franchise.

It is ironic that an embattled DC finds itself hoping to be saved by a character mocked for half a century as too innocent, too dated and too silly

All superhero stories are about wish-fulfilment and empowerment fantasies, but the genre has never been so purely encapsulated and embodied as when a young boy was granted a secret word and a magic thunderbolt. The awkwardly renamed Shazam never thrived away from his own bright, whimsical world of wizards, talking tigers and mind-controlling worms, and he always seemed hopelessly lost in a modern comics landscape of Dark Knights and angst-ridden mutants.

It is ironic that an embattled DC, its film franchise failing under the weight of its own grim pomposity, finds itself hoping to be saved at least in part by “The Big Red Cheese”, a character it once did everything in its power to crush, a hero mocked for half a century as too innocent, too dated, and too silly for a genre once the beloved, exclusive preserve of small children.

Shazam! is in cinemas from Friday, April 5th