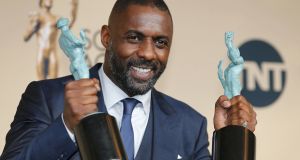 “Ladies and gentlemen, welcome to diverse TV,” Idris Elba joked on stage after winning twice at Saturday’s Screen Actors Guild Awards, where minority actors claimed a slew of wins amid a furore over the lack of on-screen diversity in Hollywood.

Leonardo DiCaprio, Brie Larson and the cast of Spotlight - all white actors - won the top three film awards of the night, but the rest of the awards honoured diverse casts and roles.

The awards were in stark contrast to the Oscars, where no minority actors are nominated this year for the industry’s highest honours.

Spotlight, a film about the Boston Globe’s investigation of child abuse in the Catholic church, beat out hip-hop biopic Straight Outta Compton for best film ensemble.

“This is not only for survivors of this horrific situation, this is really for the disenfranchised,” Keaton said.

“This is for the Flint, Michigans in the world, for the powerless.”

DiCaprio was named best actor for playing a fur-trapper in pioneer-era retribution drama The Revenant.

Larson, who played a woman held hostage with her young son in Room, was named best actress, while Sweden’s Alicia Vikander won best supporting actress for her role as the wife of transgender artist Lili Elbe in The Danish Girl.

Spotlight, DiCaprio, Larson and Vikander are all nominated for Oscars, and their Saturday wins cemented them as frontrunners in their respective categories.

“We made a film about real people and real lives, and to be awarded for that is very special,” Elba said of his best supporting actor win.

“Look at this stage,” cast member Laura Prepon said while accepting the award.

“I’d like to dedicate this award to the non-Maura Pfeffermans who don’t have a lot of cash for their operations, for their medicine, for their freedom,” Tambor said.