Risk Cannes review: Julian Assange is back in the spotlight 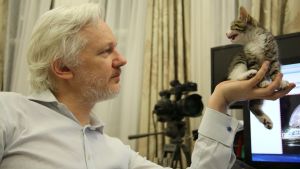 WikiLeaks founder Julian Assange holds up his new kitten at the Ecuadorian Embassy. It’s a gift from Assange’s young children to keep him company. Photograph courtesy of WikiLeaks

For one night only, revolutionary fervour is back on the Croisette. Audience members jump to their feet with #freeassange placards; there are namechecks for Edward Snowden and Chelsea Manning, who has formally appealed against her conviction and 35-year prison sentence earlier in the day. The occasion is the premiere of Risk, a new portrait of Wikileaks founder Julian Assange from Laura Poitras, who won an Oscar for her similarly-themed Edward Snowden bio-doc, Citizenfour. As the director takes the stage, she is flanked by WikiLeaks’ spokespeople Sarah Harrison and Jacob Appelbaum, two of Risk’s major players.

There have been rumours of discord between Poitras and her subject although the embedded journalistic style of her film suggests otherwise. It’s not hagiography: we do witness Assange’s QC Helena Kennedy wisely advising him not to rail against the Swedish extradition with the phrase “mad feminist conspiracy”. The Ecuadorian Embassy’s most famous guest later suggests that his accusers will be “reviled forever by a large segment of the world’s population”. The wholly supportive audience that have turned out for Risk at Cannes suggest he may be on to something.

The film, too, falls well short of anything approximating interrogation, unless we count Lady Gaga’s faux-royal visit to the confined Assange: “Do you ever feel like just fucking crying, even when you’re happy?” inquires her ladyship.

Where Citizenfour had tight focus and unprecedented access to recommend it, Risk is a scattershot affair. The film’s sprawl is often borne of necessity: repeated shots of Assange looking through the window of the embassy he has been trapped in for five-and-a-half years, or of Assange tapping away at a keyboard, are plenty communicative, but not cinematic enough to sustain a feature-length project.

The subject’s dedication to Wikileaks, similarly, allows little time for chit-chat. The huge scale of that enterprise is amplified in an opening sequence. There’s a touch of Secret Seven about watching Assange and his volunteers holed up in Ellingham Hall in Norfolk. Sarah Harrison ticks off countries on a large-scale map of the world, before attempting to put a call through to Hillary Clinton at the US State Department to discuss the 2010 diplomatic cables leak. It’s an urgent matter of national security – an “Emergency” according to the card Assange holds up – so they finally get to speak to somebody called Chad.

Cyber-punks, as we are repeatedly reminded, are important, whether we know what’s happening in the cyber wars or not. One hilarious early sequence sees Jacob Appelbaum taking on TE Data at a tech panel in Cairo: the company censored Twitter and backed Mubarak, before rebranding themselves as freedom-friendly. In the same breath, he denounces Vodafone’s collaborations with Iran’s internet censors. The assembled executives look decidedly uncomfortable.

One couldn’t claim Risk is an unqualified success but there are enough such highlights to compensate for the lack of cogency.