Return to Montauk review: A cold but classy concoction 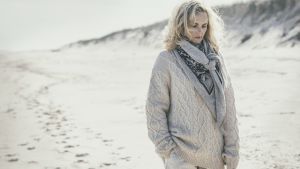 Nina Hoss in Return to Montauk

The latest film from the great Volker Schlöndorff – director of The Tin Drum and The Lost Honour of Katharina Blum – looks very much as a novelist had a hand in the script. It concerns an older writer, inexplicably loved by younger women, and his attempts to face up to regrets and mistakes while promoting a new book. If he were even more horrid and even keener on young women you’d wonder if Philip Roth was lurking in the shadows.

In fact Schlöndorff wrote the screenplay with our own Colm Tóibín. It exhibits that novelist’s fastidious precision and his interest in the roads not taken. Sadly it has none of the warmth of his best work. You could chill Champagne on the film’s chilly backside.

Stellan Skarsgård plays the moody, sullen Max Zorn, a novelist unlikely, on this evidence, to find himself discussed in Oprah’s book club. (“Zorn” means anger in German, but the character is more often depressed than furious.) Max has come to New York to flog that new tome. The film-makers have some quiet fun pushing him round the sort of awful launches and literary gatherings that almost cause one to pity successful writers. The protagonist has clearly embraced the morals invented and exploited by artists of his generation. His wife lives in New York, but he lives in Berlin. While in Manhattan, he yearns for his old love Rebecca (Nina Hoss). Eventually Max turns up at Rebecca’s law firm and, after some negotiation, they journey to Long Island for a low-key showdown.

Return to Montauk loses some of its energy when they, well, return to Montauk. The couple walk beaches with a purpose rarely seen since Taylor and Burton in The Sandpiper, but the chatter is short of hooks and attractions. Eventually, however, the drama buckles in a way that makes sense of all that has gone before.

The film, shot in damp blues and ruthlessly acted by the two leads, remains a cold concoction that demands a little too much indulgence for its characters. But it spits out class. And that’s no small thing.