Peppa Pig: My First Cinema Experience - an hour of snorts and giggles for the little ones

It’s not a movie; it’s a perfect toddler-friendly outing - but be warned, there will be oinking 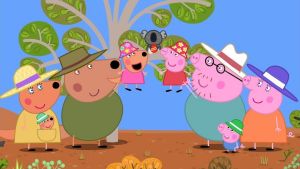 A declaration of competing interests: this reviewer did indeed receive a free Peppa Pig sticker set ahead of the Dublin premiere of Peppa Pig: My First Cinema Experience.

Eagle-eyed viewers – and advertising standard authorities – will note that the word “movie” is not attached to this theatrical extravaganza. Nor should it be. My First Cinema Experience is precisely that: a gentle introduction to the dark rooms and big, bright screens of the multiplex.

Happily, the smaller humans who attended my screening seemed to relish the opportunity to bop around in the glow of the projected image.

The “Cinema Experience” is actually comprised of previously unseen episodes and musical interludes featuring stage-show versions of our porcine heroine and her paleontologically minded brother George.

The siblings are joined by a lively human presenter named Daisy (the enthusiastic Emma Grace Arends – we’ll have whatever she’s having) who gamely belts out pleasingly silly variations of Wheels on the Bus and other pre-school standards, while urging the accompanying grown-ups in the audience to singalong and occasionally make siren noises. Be fairly warned: there will be oinking.

The new episodes of the long-running TV show are, as ever, sly and dry. When two police officers visits Peppa’s school to test for cycling proficiency, the narrator (John Sparks, peerless) explains their “Allo, Allo, Allo” greeting with: “That is how the police say hello.”

Elsewhere, Queen Elizabeth II hijacks a double decker bus to bring Peppa and her school chums on a tour of London, re-enacting the final scene of The Italian Job along the way. Fervent Brexiteers may be disappointed to note that the bus contains such immigrants as Madame Gazelle. Coming over here: educating our kids.