Pelé: A rounded portrait of the world’s greatest footballer 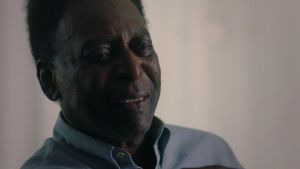 Pelé: ‘I’ve had a few affairs, some of which resulted in children, but I only learned about them later.’

Too often, sporting documentaries comprise a parade of famous talking heads repeating the same stock phrases. “She revolutionised cheese rolling as we know it” or “he was the greatest tiddlywinks player of his generation”.

Pelé, a portrait of a footballer who really did revolutionise his sport and who inarguably is the greatest of his generation eschews such tropes in favour of extensive interviews with the three-time World Cup winner.

Filmed over 18 months, the octogenarian displays little of the grandstanding he has become known for in recent interviews. Remember when the footballing legend claimed that Lionel Messi “only shoots with one leg, only has one skill and doesn’t head the ball well” and that Neymar is “just an ordinary player”? And, most outrageously, that Sepp Blatter, campaigning in 2015 for a fifth term as Fifa president, was the best candidate for the job?

Nicholas and Tryhorn’s new film for Netflix, though plenty laudatory, presents a contemplative Pelé that appears human after all. His first wife, Rosemari, he concedes, had a pretty miserable time of it: “I’ve had a few affairs, some of which resulted in children, but I only learned about them later. My first wife knew all about it.”

The film also broaches Pelé’s failure to speak out against the Brazilian military dictatorship that lasted from 1964 until 1985. When asked if he was aware of the regime’s systemic use of torture, he admits that: “If I were to say now that I had never been aware of it, that would be a lie. There was a lot we never got to find out, but there were many stories too.” (One is left to wonder if the Brazlilan manager Saldanha was removed ahead of the 1970 World Cup at Pele’s behest.)

Pelé, an engaging distillation of its subject’s career, chronicles the star’s life from his Sao Paulo boyhood to his record-breaking World Cup victory in 1970. The film breezes through his first professional contract at 15, two subsequent seasons as top striker in Brazil, and his call-up, aged 17, to the 1958 World Cup-winning side.

The film makes interesting analogies between the emergence of Pelé, Brazil as a footballing power, and Brazil as a postcolonial nation. Those parallels make Brazil’s 4-1 trouncing of Italy in the 1970 World Cup final – with Pele scoring one goal and assisting another two – even more compelling than his splendid performance in the box.