Palm Dog goes to the pooch from The Meyerowitz Stories 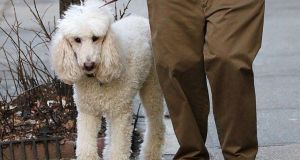 Pedro Almodóvar may have effectively ruled Noah Baumbach’s The Meyerowitz Stories and Bong Joon-ho’s Okja – two Netflix releases – out of the race for the Palme d’Or, but the good people at the Palm Dog have embraced streaming by awarding their top prize to Bruno, a poodle from the Baumbach picture.

Sadly, Bruno could not travel, but a hugely friendly stand-in from the Cannes area was drafted in for the photocall.

In The Meyerowitz Stories, boozy Emma Thompson imposes Bruno, named for a character in a Werner Herzog film, on her husband, a grumpy sculptor played by Dustin Hoffman. The character doesn’t much like the beast, but Hoffman himself has been photographed walking him on set. He’s a proper actor, that Dustin.

The Jury Prize was awarded to a motorbike riding dog from Léa Mysius’s Critics Week smash Eva. The great Leslie Caron received a special Dogtarian award in absentia (the criteria for which remain a bit obscure).

The Palm Dog is unmistakably British in its aims and tone (though eminently accessible to the Irish temperament). Conceived 17 years ago by producer Toby Rose, the bash seeks to honour the most notable canine performances featured in the official selection and parallel events.

Congrats to #PalmDog winner Bruno #TheMeyerowitzStories - here's me with pooch who accepted on his behalf #Cannes pic.twitter.com/xx0PY8QADB

Previous winners have included Baby Boy in Behind the Candelabra, Uggie in The Artist and – a controversial virtual win – Dug from Pixar’s Up. Jones traditionally welcomes guests to the UK Pavillion, which backs onto the azure Mediterranean, with a speech that regards no pun as too groan-worthy. “Friends, Rovers and countrymen,” he said in a characteristic opening.

Kate Muir of the Times was on hand to welcome on stage three of the sniffer dogs who patrol the festival. This year, one of the Alsatians – a handsome chap called Glock – had been employed in giving the Debussy Theatre a once over following evacuation after the discovery of a suspect package. Clearly enjoying himself, despite all the Anglo-Saxon frivolity, he barked enthusiastically from the stage as tributes were paid to his efficiency and bravery.

In recent years, Peter Bradshaw, chief film critic with the Guardian, has given a sort of keynote address that runs through the dog interest in the relevant year’s event. If you’re not paying attention, such appearances can easily pass you by. Peter reminded us that, in Michael Haneke’s typically sunny Happy End, a large dog, prone to barking menacingly at the patriarch of a bourgeois dynasty, offers reminders of the mean world that lurks at the elbow of the rich and complacent.

Nothing would have given the cognoscenti greater pleasure than a glimpse of the famously gloomy Haneke turning up at this proudly silly event. Indeed, in that director’s Amour, one character takes a dig at the English propensity for turning everything into a joke. One suspects that, even had his dog won, the Austrian would not have made the short journey down to the beach.

One dog was outrageously overlooked. The inquisitive whippet (if it’s actually just a small greyhound don’t sue me) in Ruben Östlund’s The Square steals every scene as she peers inquisitively from behind her owner. This writer felt that the creature was worthy of at least a Jury Prize. This was almost as outrageous a decision as the exclusion of the killer dog from Green Room two years ago. What the heck is going on?

Anyway, the Palm Dog remains a well-organised trifle that, for regular attendees, ushers in the festival’s last rites in agreeably lighthearted form. Fellow British critics Anna Smith, Kaleem Aftab and Charles Gant joined Bradshaw and Muir on what must be the most entertaining jury in town.

Now that’s done, we can begin putting our socks and underpants back in our cases.