Noble review: a true story – both terrible and inspiring 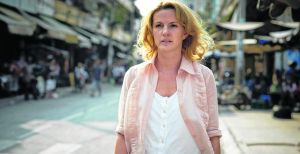 How do you capture a personality so enormous as Christina Noble? Over the last quarter of a century, the indomitable Dubliner has toiled energetically to improve the lot of orphaned and abandoned children in South East Asia. Those public achievements ask a great deal of a biographical film-maker, but it is, perhaps, harder still to get any grip on Noble’s tragic, puzzling, occasionally fantastic personal journey.

Stephen Bradley’s response in his big, thumping bruiser of a film has been to unplug the tearducts, ramp up the period detail and fuel the melodrama. Noble is rarely subtle. The depictions of the heroine’s life in grim mid-century Ireland have all the dustily picturesque misery of a Catherine Cookson adaption (by most accounts, Noble’s early experiences were considerably worse than those represented in the film).

More than a few characters telegraph their looming narrative arcs within seconds of appearing on screen: the creepy sex tourist; the initially resistant, ultimately helpful, functionary; the nun who seems “nice at first”. Yet there is no doubt that the thing works. Fuelled by excellent performances, Noble has an uncomplicated integrity to it that will warm even the most resistant heart.

Bradley, who writes and directs, employs an effective twin narrative. We begin with Noble, in the adult form of Deirdre O’Kane, making her first journey to Vietnam during the 1980s. She checks in at a down-at-heel hotel and, before too long, has begun the benign meddling that characterises so many of the most effective charity campaigners. Every now and then we flash back to find the young Christina growing up in Ireland. Her mother dies when she is still a child.

Her father –it had to be the unstoppable Liam Cunningham – is depicted as a classic incarnation of the sometimes loveable, often drunk, always incorrigible layabout. Christina ends up in a religious institution of depressingly familiar brutality and goes on to suffer homelessness, sexual violence and the formal abduction of her first child.

Bradley and Trevor Forrest, his gifted cinematographer, demonstrate that the best way to represent 1950s Ireland is to create an environment that looks like the 1930s anywhere else. The crowded tenements, heaving pubs and icy children’s home are slightly prettified, but this still looks like a sordid Republic. Britain’s west-midlands, to where Christina emigrated for further adventures, comes across like Las Vegas by comparison.

The stuff of magic-realism The film-makers have some trouble making sense of the most peculiar episode in the story. Noble got the idea to travel to Vietnam after having a dream about that country during the 1970s. This is the stuff of magic-realism and it sits oddly in a film otherwise grounded in the dust and soil of everyday life. Real life genuinely can be more bizarre than fiction.

The film would be nothing without robust actors. Happily, Bradley has dragged out two excellent turns to support O’Kane’s sturdy lead. Gloria Cramer Curtis is irrepressible as the childhood Noble: a noisy, capable scamp who loved to warble the songs of Doris Day. The Tony- and Olivier-nominated Sarah Greene, one of our best young actors, is nothing less than magnificent as Christina in late adolescence and young adulthood. Her friendship with Ruth Negga’s plucky fireball has the makings of a film in its own right.

Ultimately it is the awareness of a true story – both terrible and inspiring – lurking beneath the clever artifice that allows Noble to surge. Ciarín Scott’s excellent forthcoming documentary, In a House That Ceased to Be, will tell the story from a more sober perspective. For now, this storming biopic will do very nicely as tribute and shameless crowdpleaser.