My Life as a Courgette: a beautifully balanced visual marvel 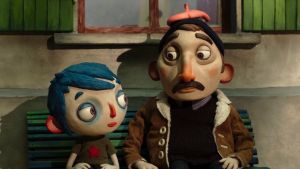 Social realism for kids: My Life as a Courgette

Film Title: My Life as a Courgette

For much of its duration, Claude Barras’s lovely French animation – a nominee at this year’s Oscars – looks to be telling the saddest story ever told. The picture opens with a young, blue-haired boy, who goes by the name of Courgette, living uncomfortably with his boozy mother.

He flies a kite through the attic window and builds pyramids from mum’s empty beer cans. Any person who’s spent time alone as a child will recognise the desperate effort to fill those hours with doodles and distractions. Following a mishap, Courgette finds himself being driven to a children’s home by a well-meaning police officer. There he meets kids who have problems of similar and greater magnitude to his own.

There are the makings of a brutal social-realist piece in that scenario. But, working from a book by Gilles Paris, Barras turns the piece into a celebration of little decencies and quiet kindness. The stop-motion animation depicts the individual kids with great economy.

One possibly autistic girl expresses unease by allowing a curtain of hair to fall over an eye. Another fellow has a plaster permanently between nose and eye. Courgette’s initial bête noir, a half-hearted bully who is open to negotiation, sports an aggressive point of red hair in the middle of his head. They are all damaged, but they all have something to give.

For the most part, unkindness is kept off screen. Courgette’s mum - sad, rather than actively abusive, we suspect - is little more than a slouching shadow in front of the TV. The cruel aunt who (in prime Dickensian fashion) looks to snatch Courgette’s female friend for the social welfare payments doesn’t reckon with the ingenuity of our team.

The film is a beautifully balanced visual marvel. There is always something fascinating happening in the corner of every frame. Barras has a habit of holding group shots longer than expected to press home the increasing closeness of the kids. He gives them round, expressive eyes, framed by reddened rims that speak to their continuing stress.

If My Life as a Courgette has a problem – and it probably doesn’t – it is to do with the excessively sunny depiction of children in care. Few can live in quite such borderline idyllic circumstances. Only a jerk would, however, long to see these wonderful characters further inconvenienced.