With coronavirus causing flight havoc, Adam Grennan had to grit his teeth to get home 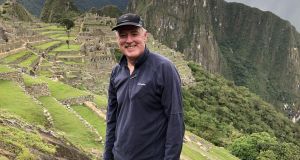 Less than a year ago, Machu Picchu, the Amazonian jungle and the Bolivian salt flats seemed well out of reach for this 60-year-old. However, early retirement and the prospect of travelling with one of my sons, who was already in South America on a six-month career break, meant I suddenly had both the time and the opportunity.

It wasn’t exactly easy having to lug around a 15 kg backpack, sleep in 30-degree heat and 80 per cent humidity, or trust our Bolivian guide when he insisted he “knew where he was going” as he drove us through a blizzard up the side of a mountain. And yet, every last moment was spectacular. So much so, that at times I thought I was dreaming. But if I was, I woke with a start just 48 hours before I was due to travel back home.

The email informed me that the “President of Bolivia” had cancelled my flights...and all others to and from Europe as a result of coronavirus.

Just 24 hours earlier, I’d left my Spanish-speaking son at the Chilean border to continue his adventure. Now, feeling a little tired, more than a little emotional and very much alone, I was holed up in a small hotel in La Paz, in Peru. I tried to find another route home online.

Borders were closing throughout South America. Canada was my first choice. I had thought about the US but it was unlikely the US border would remain open for long. La Paz - Santa Cruz - Lima - Toronto - Dublin. That seemed a good option. Unfortunately, I delayed (about 60 seconds) and when I went to book the route had disappeared.

I looked again. La Paz - Santa Cruz - Santiago - Madrid - Dublin. This time I didn’t hesitate, however, within seconds the cost jumped from €750 to €4,500. And so, it went for the next eight hours. Routes disappeared and prices climbed sharply. Eventually, with help of family back home, I managed to find a route, and book it before the cost escalated.

I would start my journey with a short taxi ride from the hotel to El Alto, the local airport in La Paz. From there I’d fly to Santa Cruz, Bolivia’s international airport, where I’d have a short layover – 90 minutes – before flying on to Sao Paulo in Brazil. I’d then have, what seemed to be, a generous five hours before the next flight. However, during that time I had to pick up my bag, clear immigration, transfer to another airport, check in at this new airport, clear emigration and do all this before the flight closed 45 minutes ahead of take-off.

If successful, my reward was a flight to Lisbon and a further nine-and-a-half hour layover before the final leg; a Ryanair flight direct to Dublin. Five flights and two road trips. It didn’t augur well.

La Paz, the highest city in the world, is shaped like a bowl, with the centre surrounded by steep inclines, making it near impossible to walk far, so the streets are permanently clogged with traffic, day and night. It’s so bad that in 2014 a network of cable cars was installed to help people to get about. The system works well, carrying tens of thousands of passengers every day and the locals love it. Unfortunately, it was of little use to me because it doesn’t go as far as the airport, so my only option was to hail a cab. I doubt you’ve ever witnessed road rage like that on display in La Paz. That and the lack of seat belts made me wonder whether my journey home might end before it had hardly begun. Somehow, I arrived at El Alto still intact.

The flight from La Paz to Santa Cruz was delayed taking off, cutting my 90-minute layover before the next flight to Sao Paulo in half.

“We’re closing the flight in 10 minutes, Mr Grennan, ” the check-in desk clerk said with a smile that suggested I’d be better off booking into a hotel and staying put.

I cleared security, narcotics – not something I was expecting – and emigration with seconds to spare before the flight was closed. (It actually took me 20 minutes but thankfully my Sao Paulo flight also didn’t leave on time.).

Sao Paulo is enormous and its traffic jams are infamous. It’s home to 13 million people. Guarulhos airport which I flew into, is in the north east and Viracopos airport, which I was due to fly out of, is 120 km away – that’s like driving from Dublin to Athlone. I sailed through immigration, picked up my bag and headed to the Uber stand – the most cost-effective way of transferring between the two airports. I was up on time. Things were looking good. Five minutes later a car pulls up. I climbed into the passenger seat and settled down. This could take up to 2 hours.

Thirty minutes into the trip the driver began to get very animated, shouting in Portuguese. (Whatever chance I had with Spanish I had absolutely none with Portuguese). Eventually he pulled onto the hard shoulder, stopped the car and started to scream and thump the fuel gauge. At which point the penny dropped: he would not have enough petrol to complete the journey.

“So, pull off the motorway and get petrol,” I said.

Eventually, he stopped banging the fuel gauge and started pointing backwards, which could only mean one thing: he wanted to bring me back to the pickup point… and that’s exactly what he did.

I’d just wasted an hour. I was now back where I started, calling another Uber. Ten minutes later it pulled up. My new driver was old enough to be my Dad, and just as slow. An hour into the journey he pulled off the motorway into a garage. No amount of grunting, banging the window or pointing at my watch made him move any faster. He moved from pump to pump until he got one that finally satisfied him. Happy again, he paid and we pulled back onto the motorway. Without warning, he was reincarnated as Ayrton Senna. We hit that road so fast I ended up having time to check in, clear emigration and eat a three-course meal before boarding the flight to Lisbon.

Ten-and-a-half hours later I landed in the Portuguese capital, planning to take full advantage of my nine-hour layover and curl up in a corner somewhere. There are two terminals in Lisbon: Terminal 1, where all the cafes and shops are located and Terminal 2, from where my flight to Dublin would depart. Having checked all was good with my ticket at Terminal 2, I made my way back over to the main terminal to find somewhere to sit, read and grab a coffee.

With about two-and-a-half hours to go I gathered my things to return to Terminal 2, but found it was surrounded by police. Social distancing had reached Lisbon. There was a queue outside. For one person to get in one person had to leave. By now I had mastered “panic”. The policewoman I approached must have seen this etched on my face and in that moment decided not to argue and let me inside. Thanks to her, my heart rate returned back to normal and I made my last connection.

FR 7137 landed with a hard bump – I didn’t mind – just after midnight, almost 48 hours after I sat into that cab in La Paz. My son arrived home from Chile 24 hours later. Stressed, absolutely, but also very relieved to be back with my family. Over the past few days my thoughts now turn to the many others, who unlike my son and I, have yet to find a route home.

Older people on isolation: ‘I have plenty of food but not much appetite’
5

Is it a good idea to move in with my partner now, or am I mad?
9

Gardening for beginners: How to sow and grow for the first time
Real news has value SUBSCRIBE