Morrissey as a miserable young man: ‘entirely asexual and a bit of an arse’

England is Mine review: Unauthorised biopic of the singer is a little lopsided but there’s plenty for Smiths fans to pore over 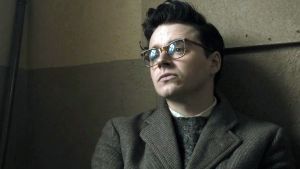 Heaven knows: Jack Lowden as Morrissey in England is Mine

Film Title: England is Mine

This pleasing origins movie for Steven Patrick Morrissey chronicles the miserable years before he went on to become a poet of a thousand discontents and the lead singer of The Smiths. Oscar nominee Mark Gill’s unauthorised biopic – like the title drawn from the 1984 track Still Ill: “England is mine, and it owes me a living” – equally gestures toward the later, cantankerous Morrissey, a bizarre, entitled contrarian who hates political correctness, admires Brexit and Nigel Farage, and thinks of Chinese people as a “sub-species”.

Gill’s screenplay (co-authored with William Thacker), completed before Morrissey’s 2013 autobiography, draws heavily on later lyrics to create a portrait of the artist as a young man between 1976 and 1982.

The mordant, articulate, young Steven (brilliantly essayed by Dunkirk star Jack Lowden) presents as peculiar marriage of self-appointed genius and crippling shyness. In keeping with the author who would later pen an improbable scene of “full-figured copulation”, in List of the Lost, he is entirely asexual and a bit of an arse.

Steven is cajoled towards auditions by his best friend, Anji (Katherine Pearce) but mostly prefers to mope in his bedroom, listening to music and writing letters to the NME. Anji is soon displaced by the artist Linder Sterling (Jessica Brown Findlay), who re-enacts the lyrics of Cemetery Gates with the future songwriter.

Droll comedy is mined from Steven’s brief spell of employment at the tax office, where his exasperated manager asks him: “Why can’t you be like everybody else?” But finally, the film, like its subject, sinks into deep depression and insularity.

In keeping with Sam Taylor-Wood’s Nowhere Boy and Anton Corbijn’s Control, England is Mine is an understated affair. Steven’s crumpled Irish dad (Peter McDonald) leaves the family home with little fuss. Nic Knowland, who once shot The Great Rock ‘n’ Roll Swindle, opts for still, classic composition. The soundtrack does not feature a single Smiths track, although that does make room for The Shangri-Las.

It’s a little lopsided but there’s plenty for Smiths fans to enjoy.

The Saturday Poem: On the Fifth Day
3

Radical Wordsworth: Focusing on the ‘spots of time’ of poet’s greatest work
9