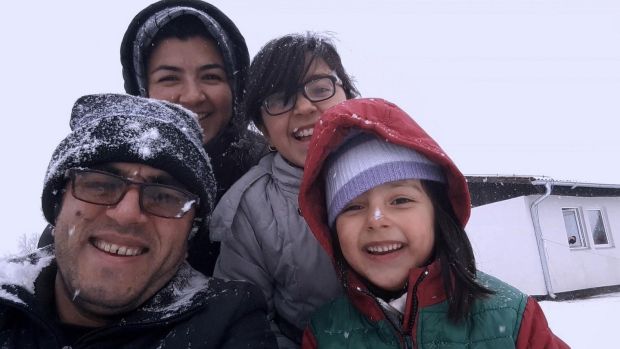 Poignant moments for a family on the run: Hassan Fazili and his wife, Fatima Hussaini, and their two daughters, Nargis and Zahra

From the opening moments, there’s a sense of urgency and uncertainty underpinning Hassan Fazili’s chronicle, a prize-winning documentary at Berlin, Sheffield, and Sundance.

Shot on three Samsung mobile phones over three years as the director and his family fled from one place to another, Midnight Traveller begins with the news that Fazili and his family – wife and fellow-filmmaker Fatima Hussaini and their two daughters, Nargis and Zahra – have been denied their request for asylum in Tajikistan and will be deported back to Afghanistan.

A bullet-stopping pile of newspaper clippings and forms reveals that Fazili and Hussaini once operated Kabul’s Art Cafe, until a mullah called for a boycott of the establishment, as it allowed men and women to congregate. The cafe soon attracted protestors and was shut down. By March 2015, after Fazili made a film about a Taliban commander, the Taliban put out a call for Fazili’s death.   As the family are deported from Tajikistan, they pore over a map: “From here we’ll go, go, go to Iran,” Fatima explains to Nargis and Zahra. “We’ll go through some countries; I don’t know their names.”

On the move, the film feels like a verité thriller. The family join a larger march of refugees running, sometimes from gunshots, toward the Turkish border. They camp in rainy forests, share mattresses in refugee centres, and squat where they can. It’s a dangerous trek: in Bulgaria anti-immigrant goons threaten to punch Nargis.

The quality of the imagery onscreen reminds the viewer how much more sophisticated the average phone camera has become even since Sean Baker’s remarkable 2015 iPhone-shot drama, Tangerine. Editor Emelie Coleman Mahdavian has done exceptional work, crafting a film that finds poignant family moments even in the darkest depths of the ongoing refugee crisis.