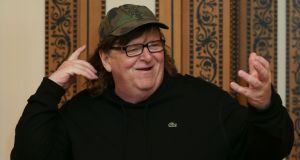 US film-maker Michael Moore has spoken angrily about the recent mass shooting in Orlando, Florida, during a visit to Dublin. File photograph: Daniel Leal-Olivas/AFP/Getty Images

Michael Moore, the radical documentarian behind Fahrenheit 9/11 and Bowling for Columbine, has spoken angrily about the recent mass shooting in Orlando, Florida, during a visit to Dublin.

“It’s a sad version of the chickens coming home to roost,” he told The Irish Times.

“Both in terms of what we did in Afghanistan and in Iraq and how that played in a sick person’s mind. And also that we made it so easy for him to kill.”

At least 50 people were killed on Sunday morning when Omar Mateen, an American of Afghan descent, discharged an assault rifle in the gay nightclub Pulse in the US city.

It is now 14 years since Moore railed against the US’s feeble gun laws in Bowling for Columbine. If anything, the country seems to have got more violent in the interim.

“Of course we’ve become a more violent society,” he said, with a weary sigh.

“We are more violent both to ourselves and to other countries. Bowling for Columbine came out six months before the Iraq War.

“We then entered on a whole new style of American violence perpetrated on people who were not a threat.”

Moore was in Dublin for a screening, hosted by the Irish Film and Television Academy, of his new film, Where to Invade Next, at the Irish Film Institute.

The picture is very much in the film-maker’s trademark polemic style, as Moore travels the world looking for socio-economic innovations that might improve US society.

He ends up recommending Italy’s approach to holiday pay, Norway’s penal system and Germany’s attitude to industrial relations. However, might he be preaching to the converted?

“No, no. Quite the opposite,” he said. “I am one of the few people on the left that reaches into a mainstream audience.

“My films do not play at the Film Forum in New York or other churches of the left. They play in shopping malls and multiplexes. I make these films as ‘movies’, not ‘documentaries’.”

This is quite the time for Moore to return to the fray. The rise of Donald Trump plays like an absurd, paranoid fantasy from one of his more overheated films.

Within hours of the Orlando shooting, the Donald was already issuing tweets boasting about how he had predicted such atrocities.

“Nothing surprises me about him now,” Moore said.

“He knows exactly what he is doing. And just wait for him to double-down and triple-down on that in the next 24 or 48 hours. He never backs down and that’s what makes him very attractive to certain people.”

Moore was one of those who felt, from relatively early on, that Trump had a good chance of taking the Republican presidential nomination.

On a recent episode of Real Time with Bill Maher, he ruefully recalled his 20-something self joking that the US was never going to elect a B-movie actor like Ronald Reagan. He is now wiser.

“I was not surprised about Trump,” he said. “They are a racist party. They made a decision in 2009, after Obama was inaugurated, to block him every step of the way – because he was Barack Hussein Obama.

“Back then Trump was the one pushing the myth that Obama was born in Kenya and was a Muslim. They didn’t stop him. To watch them whine now is absurd. They created this Frankenstein monster. I have no sympathy for them.”

Moore worries that, if the turnout is low in November, Trump could take the vital “rust-belt” states and stage an upset.

He has advice for the Democrats’ presumptive nominee Hillary Clinton.

“She should heap massive ridicule on him,” he said. “She should use her sense of humour and she should go at him. Look, you know the way women go after men? No? Ha ha! Women are great at calling us on our s**t.

“How often have we been left with that look on our face after women have called us on our s**t. If she does that the way [Senator] Elizabeth Warren has been doing she will be effective.”

Before plunging back into the battle, the proud Michigander, slimmer after a recent bout with pneumonia, got a chance to stroll about the country of his ancestors.

“Ireland is a home that always existed in our home,” he laughed.

“It’s a version of what I grew up with. How interesting it is to walk down the street and see people who look like Uncle Tommy or whoever. It’s like being at a huge family reunion. Ha ha!”

Where to Invade Next is on limited release.