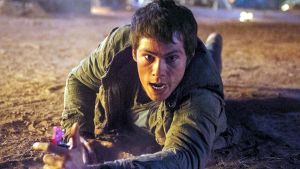 When last we left Young Adult Dystopian Fiction number 34, we were bombarded with a series of explanations that seemed like they had little, if anything, to do with the rather dull riff on Lord of the Flies we had just viewed. Solar flares? Medical trials? Apocalyptic virus? Evil corporation? That’s it? Anything else?

Happily, all that muddled exposition allows for the second Maze Runner film to be far more entertaining than its predecessor. This time around, Thomas (Dylan O’Brien) and his Glader chums have escaped the clutches of WCKD – the diabolical Big Pharma outfit headed up by Patricia Clarkson – only to discover that their saviour is murderous WCKD henchman Janson (Aidan Gillen). They escape only to run into a zombie apocalypse.

Mostly, the film is composed of chase sequences, which, barring a few too many fast cuts, are capably orchestrated by SFX whiz-turned-director, Wes Ball. Conversely, whenever Thomas isn’t running , the film, literally and figuratively, grinds to halt.

Some terrific thespians – Clarkson, Pepper, Taylor – bring gravitas to this most long-winded universe, but their appearances and roles are far too brief. There is little room for nuanced performance or characterisation in the terrifying future of The Maze Runner.

The younger cast do their best with souped-up Swallows and Amazons material but there’s only so much one can do with the exposition-weighted dialogue.

Still, there’s plenty of fun to be had from the fleet-footed zombies and random nods to Mad Max.