Jonathan Glazer: the joy of division

He has made just three films in 14 years – the first was universally praised, the second is a continuing puzzle to most, and now, Glazer latest,Under the Skin, starring Scarlett Johansson, is cleaving audiences into impassioned opposing camps 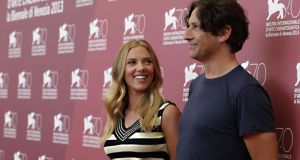 Jonathan Glazer occupies a singular position in the pantheon of British film directors. When wise people draw up lists of contemporary masters, Glazer – also one of the world’s top commercials directors – tends to find his name hovering near the top 10. After all, most everybody loved his 2000 thriller Sexy Beast. Among other achievements, that film managed to reinvent Ben Kingsley’s image. The saintly Gandhi was transformed into a sweary, unpredictable psychopath.

After that, things turned a little peculiar. Released in 2004, the extraordinary Birth – starring Nicole Kidman as a woman convinced her late husband had returned in the body of a young boy – was greeted with a handful of raves and a volley of brickbats. It took nearly a decade for him to deliver his third film. Under the Skin , a triumphantly peculiar science-fiction drama featuring Scarlett Johansson adrift in Glasgow, triggered more division on its premiere at the Venice Film Festival. Most critics adored it. But those that hated it, really, really hated it.

“Yeah thank God for that,” he says with apparent sincerity. “You wouldn’t want consensus. You wouldn’t want anybody to say they ‘didn’t mind it’. The reception in Venice was very divisive. I would rather that than indifference.”

He must have been ever so slightly conflicted that so many of the reviews – even the bad ones – described Birth as “underappreciated” or “undervalued”. Where the hell were those writers when the film came out?

“I don’t know. It’s not my role to say: ‘It’s a really good film’. I am lucky enough to do what I have to do. I like it if somebody says they really liked Birth and it meant a great deal to them. But the need to make a decision immediately is a burden. It should be like an album you listen to and at first think, ‘what the hell is this?’, then come to love.”

So, what’s got so many people so riled up (and many more propelled into ecstatic trances) by Under the Skin ? Based very loosely on a Michael Faber novel, the picture follows Johansson – a visiting alien – as she drives about Glasgow, picks up men, drowns them in a lake of oil and then melts them into pulp. Possessor of an enviably sharp eye, Glazer peppers the film with glossy images. But the most striking sections of Under the Skin find Johansson wandering about among genuine citizens of that great Scottish city.

“Once we understood that was the way to do it, we realised it wasn’t about setting up a movie set and having actors pretending to be bus drivers or whatever,” he says. “Once we put her in that world, we need to be undetectable. We need to film from bird hides. We need cameras in a pot of tea. For the scene in a department store, we had a camera in a mop bucket, one in an umbrella and another up a sleeve.”

Lest there be any doubt, let me clarify that Under the Skin strikes me as something close to a masterpiece. Few science-fiction films have done quite such a good job of conveying the alien. By selecting a superstar to play the visiting entity, Glazer is borrowing a trick from Nicolas Roeg’s The Man who Fell to Earth . But the juxtaposition of Johansson with ordinary citizens makes her seem even stranger than David Bowie appeared in that film. Was it important that a “movie star” played the protagonist? The sight of an Avenger – dressed in stone-washed jeans and fun fur – pottering about Primark on Sauchiehall St is an unutterably odd one.

“Yes it was. Of course,” he says. “It was one of those things locked into the narrative. The execution was vital: the hidden cameras and so forth. It made a great deal of sense to cast somebody very well known out of context. I remember seeing her walking along the street in a pink jumper on a long lens and she looks like an exotic insect on the wrong continent.”

So, given that Johansson seemed to be out alone with no camera crew, did members of the public often stop her? Perhaps the shoppers couldn’t quite believe it was her.

“You’ve already answered it,” he laughs. “The answer isn’t ‘never’. There were times when people did a double-take. But even those worked for us. There were only a couple of occasions where people recognised who she was and said something.”

Glazer comes across as a relaxed sort of individual. Mildly dishevelled, hair a bit frizzy, he has none of the juiced-up slickness you might expect from a director of hugely budgeted commercials such as that Guinness thing with the surfer (voted best-ever TV ad on a recent Channel 4 clip show). Born in London, he studied theatre design at Nottingham Polytechnic – now Nottingham Trent University – and got his first break editing film and television trailers.

“That’s a very intense education for a film-maker,” he remembers. “You have the luxury of sifting through the work and you learn how powerful trailers are.”

Decades after Ridley Scott and Alan Parker made the leap from commercials to features, a slightly snobbish taint still hangs over directors who take that path. They’re all gloss. They’re all style. Such is the line. It certainly is a strange sort of training. Are the cynics imagining all this or can Glazer sense a common aesthetic among those directors who started off flogging stout and toothpaste?

“It’s an interesting question,” he says. “But remember that [great Indian neorealist] Satyajit Ray began making TV commercial. I think that when Alan Parker’s generation turned into film-makers, there was a particular visual style. That may happen again. I approach it all the same way. Telling a story in 60 seconds is a particular creative and intellectual challenge. There is nothing to be ashamed about there.”

At any rate, there is little vacuous or throwaway about Glazer’s work for the big screen. He is not a cosy director. Birth and Under the Skin have a disconcerting distance to them that sends a considerable chill through the audience’s bones. This may, perhaps, explain why it took a decade for so many critics to get their head around the first of those two films.

While that warming-up was underway, Glazer spent an age developing, reimagining and, eventually, shooting Under the Skin. What the heck was he up to for all those years? Michael Winterbottom has, by my quick reckoning, made 153 films since 2004.

“It is a decade. The truthful answer is not so straightforward,” he says. “ Under the Skin was a project I took on because I knew I would be interested in it for a long time. The idea of seeing through an alien lens is a fantastic opening. You commit to that, but you don’t commit to a method or a vocabulary for a while. You find that through a rigorous process of research.”

Along the way, a staggering array of actors were “associated” with the project: Eva Green, January Jones, Abbie Cornish and Olivia Wilde, to name just a few.

So, how did he eventually convince Johansson to get on board? Not only does she have to meander apparently unaccompanied through ordinary streets, she also, in the second half of the picture, has to roll about in dirt, run madly through remote forests and – not so much of a trial, this – watch one of Tommy Cooper’s greatest routines.

“It wasn’t a problem. She and I had been talking for three or four years – maybe more – before there was a script. We were orbiting each other a little bit. Once she had read the draft, it was a live exchange. We talked about it like we’d read the same book – as if neither had any vested interest or agenda. She agreed to these methods and she never wavered from that.”

So, we hope and trust that Glazer is not going to spend quite so long making his fourth film. Under the Skin is never going to scare up blockbuster-levels of box-office takings, but the fact that it is being talked about will surely further elevate the director’s standing. Then again, maybe he’d like more of a quiet life next time. It might be nice to make a film that everybody embraced warmly.

He pauses to consider one of the great French masters.


Under the Skin opens on March 14th