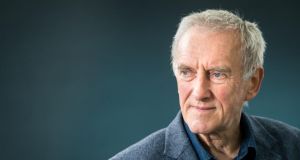 James Kelman: “I always wrote about the people in the pub or the bookie’s.” Photograph: Roberto Ricciuti/ Getty

James Kelman is sipping black coffee in the cafe of Glasgow’s Mitchell Library; the largest public reference facility in Europe, that houses over one million books, the world’s largest Robert Burns collection, and a family history archive that frequently features in the genealogical television series Who Do You Think You Are?. But for Kelman, the Mitchell’s Spirit of Revolt community archive dedicated to the Scottish anarchist and libertarian-socialist movement is far more meaningful. Several years ago, Kelman discovered that his great uncle was imprisoned in Edinburgh for his part in the audacious Deer Park raids reclaiming hunting land from the aristocracy.

In addition to penning nine novels, several short story collections and essays, Kelman is a staunch socialist. “I’ve always felt strong notions of community and solidarity,” he states. “I’ve occupied this position from the early 1970s. Hostility forces self-analysis, so I had to work out why the hell I was offending people. Why do certain people like what I do, and others don’t? I was forced to confront that as a young artist. My mother would never attack me for using bad language, but would say, ‘Why don’t you write a nice story?’”

How Late it Was, How Late famously won the Booker Prize in 1994, provoking Simon Jenkins to dismiss Kelman as “an illiterate savage” who had done nothing more than “transcribe the rambling thoughts of a blind Glaswegian drunk”. Kelman believes such resentment towards his work started long beforehand.

There was hostility towards my first novel, and even a question raised in parliament about why publishers were being given grants to publish such a novel

“There was hostility towards my first novel, The Busconductor Hines, and even a question raised in parliament about why publishers were being funded and given grants to publish such a novel,” he explains. “My next novel received no grants. In a way, what happened with the Booker was an extension of that.”

Kelman currently doesn’t have a publisher, although Canon Gate published his last novel Dirt Road (2016) and a short story collection, That Was a Shiver (2017) “What cannot be ignored is the effect the hostility has on whether or not your publisher sells the book,” he maintains. “When it came to 1994 and the Booker Prize, the Director of Dillon’s said they wouldn’t stock it. They were the second largest bookseller after Waterstone’s at the time. I’ve been on Random House and Penguin, but no one publishes me at the moment. I can’t blame them, because I used to be a salesman.”

Indeed, Kelman worked several different jobs, including a bus driver. “It would’ve made a nice headline, ‘Booker Prize winner drives buses’,” he laughs. After How Late it Was, How Late, Kelman published Translated Accounts in 2001; 54 monologues about persecution. “It was ridiculed by some critics and treated as a joke,” Kelman says.” It was very difficult for people of a certain tradition. People from another tradition found it less difficult. In order to treat it in a serious way, they’d have to treat me as a serious writer, and if they were to do that, they’d have to ask serious questions, such as why are they not stocking my books. It’s how the establishment deals with a different voice. Let’s hope he dies soon so we can canonise him.”

Now 71, Kelman is producing some of the finest work of his career. Dirt Road follows a bereaved 15-year-old boy and his father on a visit to the United States, effortlessly articulating a teenager’s point of view. It’s his second novel set in America after You Have to Be Careful in the Land of the Free in 2004. “My connection with the States is quite strong,” Kelman states. “My family emigrated to the States when I was 17. I came back with my family, but two of my brothers stayed. One eventually came back, but another has been there since 1963. You’re guaranteed to meet an Irish or Scottish guy anywhere you go in the States who thinks he can’t come home because he thinks he hasn’t been successful enough. He holds down an ordinary job, which might well be a good job. He doesn’t want to be Jack the Lad and throw money around, but he wants to be able go back home and be self-sufficient, take all his family out for a meal, and be an American.”

I was very class conscious, which led to extraordinary rows with my father. I’d ask him why he fought for the army and the royal family, and why didn’t he turn his gun on them

Kelman shares common ground with writers from Africa, the Caribbean and beyond. ”There is tremendous awareness of an anti-imperialist tradition in parts of Africa, the Americas, Australasia and the sub-continent,” he says. ”You discover cultures that are fighting back with no choice except to use English. Writers in Africa are very aware of these issues and language as orature. I’m not going to name names, but many Irish writers are mildly disappointing, because they never seem to consider these issues at all. Without knowing it, they seem to take on the Anglo-Irish perspective. They get cushy jobs in London or New York in all the usual organs because they never challenge a single damn thing. There has been nothing of note in the Irish tradition for about 100 years.”

James Kelman is regarded as one of the most influential and original writers of the post-war period. “I always wrote about the people in the pub or the bookies shop,” he states. “I never wanted to write about my grandfather from the perspective of a social worker, but from his very own perspective, or maybe that of his pal. The structure of How Late it Was, How Late is a guy telling a story about another guy who drinks in the same pub, which turns it into a third-party narration so there is always a shifting between the first and third person. I’m very comfortable with this and so are people from other cultures, but the Anglo-American tradition simply can’t handle it. It is a grammatical absurdity about how they use language and a constant need to separate dialogue from internal machinations. I was forced into an anti-establishment position, simply because I wanted to explore this as a contemporary young artist.”

Kelman believes his outlook was forged at an early age. “I’m very aware of solidarity and community among writers because I was brought up as an ordinary working class boy, except my family were always readers and very much aware of other cultures,” he says. “I was very class conscious, which led to extraordinary rows with my father. I’d ask him why he fought for the army and the royal family, and why didn’t he turn his gun on them. That’s got a lot to do with me as an artist. There’s never been a time I’ve not been politicised.”

James Kelman will be in conversation with Niall MacMonagle in the Pavilion Theatre, Dún Laoghaire, on Thursday, March 22nd, at 8.30pm

Blake Morrison
Pavilion Theatre; Saturday, March 24th, 5pm
Blake Morrison partially inspired a new wave of memoir writing with And When Did You Last See Your Father? and Things My Mother Never Told Me. His latest novel, The Executioner, is about a journalist who grudgingly agrees to be an executioner for a will.

Angela Davis
Pavilion Theatre; Sunday, March 25th, 8.30pm
A radical counterculture figure since the 1960s, the legendary Alabama activist even inspired Yoko Ono and John Lennon to write a campaign song calling for her release from prison. Already sold out.