It’s Not Yet Dark: A moving, lively story that's an example to us all

This well-made documentary about Simon Fitzmaurice, who has motor neurone disease, never dips into melodrama 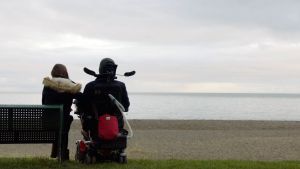 Simon and Ruth Fitzmaurice in It’s Not Yet Dark

Film Title: It's Not Yet Dark

Over the last few years, Simon Fitzmaurice has become a sort of legend in Irish cultural circles. He is the stubborn mule who, after contracting motor neurone disease, refused to sit back from his ambitions as a film-maker and, assisted by friends and technology, directed the accomplished feature My Name is Emily. Clearly a man with a restless brain, Fitzmaurice – relying on an eye-gaze computer – also completed a memoir of his illness titled It’s Not Yet Dark. Now it has become a moving, lively documentary. He’s an example to us all.

Without imposing any gimmicks, director Frankie Fenton, an experienced television professional, has brought visual variety to his largely chronological retelling of an often-appalling story. He incorporates gorgeous mobile shots of the Irish countryside. A visit to Australia following diagnosis allows sunlight into a story that is already starting to close in upon the viewer. For a picture that has much to do with depletion, It’s Not Yet Dark buzzes with all the right sorts of energy.

Top talent fleshes out the credits and adds class to the package. Colin Farrell speaks Fitzmaurice’s words with a mellifluousness that never dips into the melodramatic. Stephen Rennicks, frequent collaborator with Lenny Abrahamson, delivers an effective, unobtrusive score.

After an introduction that lays out the complications of Fitzmaurice’s condition – paralysed from the neck down, he breathes via respirator and communicates with a voice simulator – we drift back to hear about an ordinary middle-class upbringing. He was smart but he didn’t try very hard at school. He and his dad loved watching classic cinema together. The most important voice, aside from that of the narrator, belongs to Ruth Fitzmaurice, Simon’s wife (now an acclaimed author of a revelatory memoir). Early on she reveals that, in their first meetings, Simon came across as an arrogant jerk. She soon softened to him, but that initial impression hints at a strength of personality that will serve him well when the illness strikes.

Ruth relates the many hardships they were to face, but she is not allowed (or does not allow herself) to wallow in any sort of self-pity. The sense throughout is of a relentless drive forward. Halt and the earth might swallow them up.

Following college and film school, Fitzmaurice directed a fine short that took him to the Sundance Film Festival. While walking the streets of Park City, Utah, a stubborn pain in his foot continued to nag. Nobody thought anything much of it. But a doctor eventually diagnosed the same disease that has clawed away at Stephen Hawking.

Archive footage leads towards a destination with which we are already familiar. Now wrapped in a sturdy, Arctic explorer’s beard, Simon relies upon dedicated staff to keep him aloft. The film is good on the logistical and aesthetic details of that care. Ruth and Simon considered changing the American-tinged vowels of his voice simulator, but, by that stage, they reckoned it had become an immovable part of his personality. A visiting boffin explains how the technology functions. Later still, we get fascinating insights into how – making much use of storyboards and the admirable Liz Gill as support director – he managed to stay in control of My Name is Emily on set.

There is much wisdom in Fitzmaurice’s text. (“The best part of living with MND is living,” he wryly notes). As was the case with My Name is Emily, there are also, for this critic’s taste, a few too many outbreaks of borderline-New Age inspirational sloganeering. Mind you, if any person should be indulged in that regard it is Simon Fitzmaurice. A very well-made tribute.

Are You with Me?: How Kevin Boyle opened a path away from sectarianism
9