Bright review: Will Smith dusts off his Men in Black suit

Set in an alternate LA where humans coexist with fantasy creatures, action-thriller Bright follows a human cop (Will Smith) and his orc partner (Joel Edgerton) as they embark on a routine patrol night, but become embroiled in a turf war. 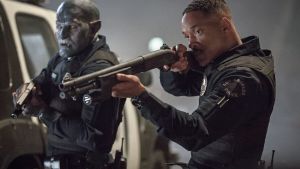 LAPD officer Daryl Ward (Will Smith) and token orc Deputy Nick Jakoby (Joel Edgerton) are beat partners in an alternate world where humans have coexisted with fantasy creatures since the beginning of time. Here, elves live in gated, gilded enclaves and lend themselves to “elves rule the world” conspiracies, fairies are insectoid garden nuisances, and clannish orcs are almost universally despised.

As Bright opens, Ward is returning to active duty after an incident which he blames on Jakoby. Despite protestations to his superior, and Ward’s evident dislike of his partner, the pair are sent out on a routine patrol, which turns out to be anything but routine. After they encounter Tikka (Lucy Fry), a young elf with a dangerously powerful wand, Ward and Jakoby find themselves hunted by corrupt fellow cops, the FBI’s magic division (headed by an elvish Édgar Ramírez), gangster orcs, gangster humans, and an evil elf (Noomi Rapace) who hopes to summon the Dark Lord.

Netflix’s biggest home-produced movie of the year has star clout to match its ambitiously high concept. Working in a murky palate with regular DOP Roman Vasyanov, director David Ayer (Harsh Times, End of Watch) – the master of cop partnership movies – brings a tight, boxy focus to the complex dynamic between Ward and Jakoby.

At its best, Bright offers a clever critique of racism from a world of spells and sorcery. It’s complicated. Ward’s wife is white, a fact that even his Crip-gang neighbours don’t comment on. Jakoby’s arrival on their front lawn, however, is met with a blast of anti-orc hip-hop.

There’s a lot to unpack here. The rules and regulations pertaining to magic and interspecies relations can make for some clunky exposition. The world, too, could do with further exploration. (Did somebody say spin-off series?) There are some decent, if infrequent one-liners (“We’re not in a prophecy: we are in a stolen Toyota Corolla,” barks Ward at his companion). There are inconsistencies, not least where Fry’s mostly useless distressed damsel is concerned.

Still, you couldn’t say that Bright isn’t entertaining. At times, Smith’s performance harks back to the light-hearted sci-fi of Men in Black. The nasty, prejudiced things he says, however, are rather more in keeping with I Am Legend’s genocidal protagonist. It falls to Edgerton to bring warmth to the movie with the kindly Jakoby. Even under otherworldly prosthetics, the Australian actor is Bright’s brightest spot.

Leonard Cohen: the key songs and what they mean
9

Dear Ireland: The Abbey’s rapid response to a crisis that’s torn us apart
10