God’s Own Country review: love on a farmboy’s wages

The ‘English Brokeback Mountain’ is a gritty, muddy, magical tale of love and livestock 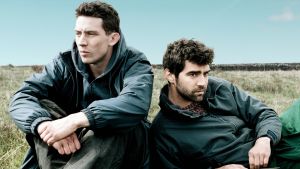 Johnny (Josh O’Connor) is an angry, taciturn young man working and stuck on the family farm. His friends, as exemplified by Robyn (Patsy Ferran), have moved away to university. His father (Ian Hart) is hobbled, widowed and entirely dependent on Johnny when it comes to the animals, and upon Johnny’s grandmother (Gemma Jones) when it comes to the homestead.

Johnny’s is a lonely, frustrating, rural existence. He accordingly drowns his sorrows nightly at the local pub. His sole other outlet is the livestock market, where he scores a sexual encounter with a handsome young man: the lubricant is saliva, the chit-chat is non-existent.

As lambing season approaches, the struggling family hire Gheorghe (Alec Secareanu), a Romanian farm labourer (this is pre-Brexit Britain, remember) to assist with the livestock.

Johnny responds to the newcomer with hostility and racism.

Most films would allow for courtship or blossoming romance or moments wherein the two stoical, silent young men would slowly warm to one another. Writer-director Francis Lee opts to dump them in the windswept dales with generic pot noodles, rustic knitwear, sheep and a compelling measure of explosive sexual tension.

This wonderful debut feature from the Yorkshire-born Lee, a major prize-winner at Berlin, Sundance and Edinburgh, arrives with huge buzz and handy comparisons attached. It’s the new Weekend, trumpet many of the film’s fans; it’s the English Brokeback Mountain, proclaim others.

In truth, God’s Own Country, which makes terrific use of the elemental landscape of the title, is far grittier and muckier than the aforementioned works of Andrew Haigh and Ang Lee. Here, the deaths of animals are regretful but presented without sentimentality. Caravans are uncomfortable. Nighttime looks intimidatingly cold. Sheep are swung overhead. Sex is muddy. Washing is for undercarriages. Cows’ arses are probed.

The English countryside hasn’t seemed this unforgiving since Emily Brontë mapped out the moors between Wuthering Heights and the neighbours.

The physical landscape is tough, but the people – at least when you get to know them – have a softness to them. These are not Yorkshire’s answer to movie rednecks. They are neither filled with gay pride, nor doomed to homophobia. Against the muddy carnal encounters, this is a film about love. There are heartfelt, affecting scenes between Johnny and Gheorghe, and between Johnny and his family members. There are even touching moments in which sheep are milked.

Josh O’Connor and Alec Secareanu make eye-catching breakthrough turns within a very fine ensemble. Director of photography Joshua James Richards finds bright spots in the bleak mid-summer. The interiors, some of which were shot at Francis Lee’s own family farm, are authentically distressed and fondly framed.

Beneath the grey veneer of rural realism, this is a magical film, one of the best you’ll see this year.