Films can be rented from the website. Conversations and seminars are free on Zoom 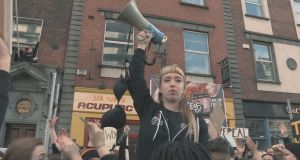 This is the time of year when the Irish film community goes west (those parts of it that aren’t already there, anyway). Come the middle of July, directors, writers, producers and the rest of the crew can be found huddling in front of the Town Hall Theatre as the Galway Film Fleadh lays out its annual wares.

Unable to plan an event during the Covid outbreak, the organisers have taken the brave decision to continue the Fleadh as a one-off digital jamboree. Films can be rented from the website and watched after a scheduled point between July 7th and July 12th (the festival’s original dates).

For conversations and seminars, punters need only register to receive a Zoom link for the live webcast. Many of the films will be accompanied by interviews with directors and crew.

The online incarnation should retain some of the communal experience that makes film festivals a vital part of the cinema calendar. Eleven world premieres, two European premieres and 10 Irish premieres are available on the website. As ever, new Irish cinema is featured prominently.

Here is where to start. Check the website for times of Q&As with film-makers.

This excellent documentary follows campaigners on the 2018 abortion referendum - most prominently the indefatigable Ailbhe Smyth - as they are buffeted by the tides of history. Moving, informative, essential. (July 7th)

THE MUSIC OF NORMAL PEOPLE

Another coup here. The Fleadh has brought together the music department of Normal People to discuss the original score and pre-existing songs which formed the soundtrack to lockdown’s big TV hit. Prepare your own question. (July 9th)

The Fleadh has long provided the chance to catch up with recent films that got only limited release in mainstream cinemas. Shinkai’s gorgeous follow-up to his animated smash Your Name is not to be missed. In any usual Fleadh the story of a girl who can magically stop rain would be eerily appropriate. (July 9th)

Interesting, surprising drama about the relationship between a mother and son returning to Ireland and the troubled family across the lake. Emma Mackey, breakout star from Netflix’s Sex Education, stars alongside Charlie Murphy and Michael McElhatton. (July 10th)

Grace Sweeney follows two candidates for sheriff in the upcoming US election. This Irish-made film promises a bottom-up look at the dynamics of Trumpian politics. (July 10th)

IN CONVERSATION WITH KEITH CARRADINE

IN CONVERSATION WITH JOE DANTE

Joe Dante is one of the inspiring forces of mainstream US cinema. Gremlins is among the best US films of the 1980s (and the sequel may be even better). Innerspace, Matinee and Small Soldiers are in a similar league. Aislinn Clarke, director of The Devil’s Doorway, hosts. (July 11th)

This sounds interesting. Branagan tells the story of a group of Irish rowers who, under the auspices of the Irish Bobsleigh and Luge Association, set out to qualify for the 1988 Winter Olympics in Calgary. Bureaucracy got in the way. (July 12th)

Over the last two decades, Collins has emerged as one of the nation’s most vital (and singular) filmmakers. His latest work examines a renowned folklorist who has explored cultures in Brazil, Turkey, North Carolina and Ireland. (July 12th)

All events are accessible from the Galway Film Fleadh website. The Fleadh runs from today until Sunday, July 12th

Shelbourne statues: Will we ever see them on St Stephen’s Green again?
5