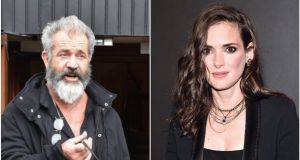 Mel Gibson has denied Winona Ryder’s allegation that he made homophobic and anti-semitic comments to her at a party. Photograph composite: Cathal Burke/Vipireland.com/Getty

Mel Gibson has denied Winona Ryder’s allegation that he made homophobic and anti-Semitic comments to her at a party.

In a statement provided to Variety, a representative for the disgraced Oscar-winner denied a story recently retold in an interview with the Heathers star. “This is 100 per cent untrue,” the statement reads. “She lied about it over a decade ago, when she talked to the press, and she’s lying about it now.”

Speaking to the Sunday Times, Ryder was asked if she had ever experienced anti-Semitism in the industry and responded with a story about the Braveheart star that she had previously shared in a GQ interview in 2010.

“We were at a crowded party with one of my good friends,” she said. “And Mel Gibson was smoking a cigar, and we’re all talking and he said to my friend, who’s gay, ‘Oh wait, am I gonna get Aids?’ And then something came up about Jews, and he said, ‘You’re not an oven dodger, are you?’”

Ryder claims that Gibson later tried to apologise, something that his rep also claims to be untrue. “She lied about him trying to apologise to her back then,” the response reads. ‘“He did reach out to her, many years ago, to confront her about her lies and she refused to address it with him.”

She has since replied to his denial. “I believe in redemption and forgiveness and hope that Mr Gibson has found a healthy way to deal with his demons, but I am not one of them,” she said in a statement. “Around 1996, my friend Kevyn Aucoin and I were on the receiving end of his hateful words. It is a painful and vivid memory for me. Only by accepting responsibility for our behavior in this life can we make amends and truly respect each other, and I wish him well on this lifelong journey.”

Reports of both anti-Semitic and homophobic behaviour have followed Gibson throughout his career. In a 1991 interview with the Spanish newspaper El País, Gibson made derogatory remarks about gay sex and claimed he would never be confused for a gay man because of the way he looks and moves. “I’m not apologising to anyone,” he said years later when a Glaad protest took place outside the premiere of Braveheart. “I’ll apologise when hell freezes over. They can f*** off.”

During a 2006 DUI arrest, Gibson also said that “Jews are responsible for all the wars in the world”. He has also been recorded on tape making racist remarks while expressing a desire for his ex-girlfriend to be raped.

Gibson will next be seen alongside Naomi Watts in the action film Boss Level and the Christmas comedy Fatman. Today it was revealed that his voice role in the Chicken Run sequel is likely to be recast. — Guardian