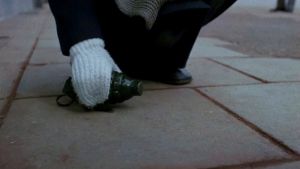 In this extraordinary collage, Frank Beauvais, critic and curator, meditates on the causes and consequences of cinephilia. Many are the movie addicts who finessed their addiction into a career behind the camera. The Nouvelle Vague was thus created. Martin Scorsese and Quentin Tarantino are also in need of treatment.

Beauvais has profited from his own addiction – up to five features a day – by cutting together a 90-minute compilation from clips of movies watched in 2016. The eclecticism is remarkable. Snippets from Elf and Blair Witch (that’s the awful sequel) dovetail with ancient public information films and East German dramas of the mid-20th century. Being a French critic, he makes sure to include bits from at least two mid-level Clint Eastwood films (Sully and A Perfect World, since you ask).

Beauvais’s morose voiceover does little to dismantle that impression. He is forced to move to the Alsace region when his Paris neighbourhood is gentrified. He is largely disdainful of the locals’ loyalty to the locale. He stays up late drinking beer and smoking weed. He swallows Russian drama and Italian Giallo. The next day he throws them up over his editing programme.

The intense pessimism and the endless introspection suggest another effusion of the current vogue for “literary non-fiction”. The best of those autobiographical screeds offer new angles on ancient neuroses. However, though he is moving about his father’s death, Beauvais skates too closely to the cliches of the bolshie French intellectual. The sequence where he scowls at a fellow car passenger’s golf clubs (quelle horreur!) could be from a ruthless parody of such people. His whining about football fans and the “idiocy” of their enthusiasm is scarcely any less silly.

For all that, there are pleasures to be had from the smoothness of the editing and the occasional black wit of the narration. The 85 minutes fly by as if they were only 83.

Streaming on Mubi from June 25th