The 40-Year-Old Version: A wildly entertaining movie, in a big week for Netflix 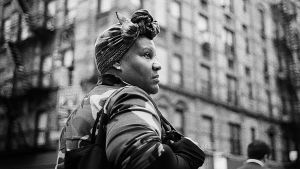 Make way for triple threat Radha Blank. In the real world, the impressive Blank has written episodes for She’s Gotta Have It. That Spike Lee joint looms large in The 40-Year-Old Version, with director of photography Eric Branco’s crisp monochrome and faux vox pop witticisms.

Writer-director Blank was named best director at Sundance 2020. She also stars as “Radha”, a fictionalised and less successful playwright, who, as her 40th birthday approaches, experiences something like a midlife crisis.

With her best plays behind her and still grieving for her late mother, Radha finds herself teaching drama to high school kids. Relations, as she notes, bear little resemblance to Dangerous Minds. It’s not that there aren’t opportunities for black women or plays in New York theatre; it’s just that they want a particular kind of black woman and play.

Thus, Radha has to be physically restrained when a smarmy white theatre producer (Reed Birney) suggests that she needs to rewrite her Harlem-based play to reflect gentrification – and add a white lead character. Failing that, he says, she could try her hand at a musical about 19th-century abolitionist Harriet Tubman.

Radha’s entertaining best friend and agent (Peter Kim) warns her: “Yes, you’re f**king talented but you’re not above being a sellout.” The compromised writer has other ideas. She channels her frustrations into recording a mixtape with a sage engineer and DJ named D (Oswin Benjamin).

But can a 40-year-old become a rapper? This and other doubts continue to plague our heroine until a brilliant final mic drop.

It’s a big week over at Netflix where the streaming juggernaut is gearing up for awards season with David Attenborough’s Life on Our Planet and this joyful indie comedy which they snapped up following the film’s triumphant Utah bow.

This is a remarkable and wildly entertaining showcase for Blank, who is terrific company whether she’s exploding the Magical Negro trope or holed up in her apartment wondering why she can’t be an artist.