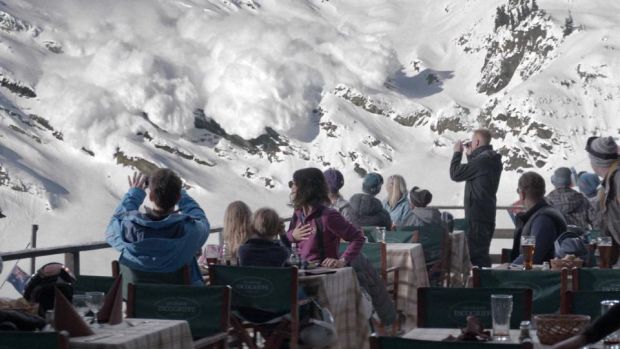 Tomas (Johannes Bah Kuhnke, squirming impressively) and Ebba (Lisa Loven Kongsli, wronged and she knows it) are a middle-class couple holidaying with their two young children at a luxury resort in the French Alps. On the second day of their vacation, a controlled avalanche gets a little uncontrolled. No one is physically hurt. But Tomas’s response – he grabs his mobile phone, almost topples his pre-school son and leaves the family behind – rather spoils the mood of the trip.

At its best, however, it is jollied along by the kind of bitter disputes that can only happen in close families. There are endless recriminations, icy looks, conversations that go around and around to no end, and, most of all, there is the excruciating sense of being stuck in a room with married people who are, figuratively, taking lumps out of each other.

DOP Fredrik Wenzel’s sublime snowscapes and an eventful denouement provide the icing and a cherry for a wicked confection. See it, then fight about it.