Horus magazine blames translation errors amid allegations interview was made up 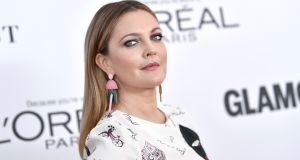 Drew Barrymore: spokesperson says she “did not participate” in interview. Photograph: Evan Agostini/Invision/AP

The inflight magazine of Egypt’s national airline has apologised over a bizarre article purportedly based on an interview with actor Drew Barrymore that sparked an online furore.

The interview in Horus magazine, which many readers said they believed was fabricated, went viral after being posted on Twitter by political analyst Adam Baron.

The Huffington Post quoted a spokesperson for Barrymore saying she “did not participate” and that her team was “working with the airline PR team”.

The article said that after “being unstable in relationships most of her life”, Barrymore decided “to temporary take an unlimited vacation to play her most crucial role a mother”.

The author of the article described how “ Barrymore has had almost 17 relationships, engagements and marriages; psychologists believe that her behaviour is only natural since she lacked the male role model in her life after her parents’ divorce when she was only 9 years old.”

Many of the the quotes attributed to the actor are also rendered in imperfect English.

The editor-in-chief of Horus magazine and the head of Ahram advertising agency which publishes it released a letter on Tuesday suggesting the problem lay in translating from English to Arabic and back again.

“We apologise for any misunderstanding that might be interpreted as an offence to the great artist,” they wrote.

The bylined journalist, Aida Takla, tweeted on October 3rd that the magazine may have heavily edited her piece but: “This doesn’t negate the fact that the interview with Drew Barrimoor which took place in New York is genuine &far from fake.”

The editor and publisher did not directly answer claims the interview had been fabricated but said all material submitted in a foreign language is translated into Arabic and then into English.

As for the opening paragraphs of the article, which says Barrymore “has been subconsciously seeking attention and care from a male figure”, they said any such introduction could be a “product of the editor’s creativity on the condition that it contains no information that is contrary to the truth.”

“We are about to investigate this by checking thoroughly the source-material that the translator depended on to write the interview,” they said. – Reuters

New Irish Writing: A Little Cloud by A Joseph Black
10