Review: This terrific study of the 1969 Moon landing is all about the man inside the suit 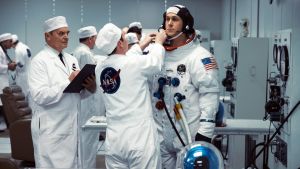 Damien Chazelle’s terrific study of Neil Armstrong’s great moment makes much of the sensual assault that greeted the early astronauts on their way to the moon.

It is the sound that registers most strongly. Each rivet cost more than any rivet ever made (the one next to it excepted). The computing hardware – though feeble when compared with the device on which you’re probably reading this review – stretched contemporary scientists to the outer frontiers of possibility.

Yet the module still creaked and buckled like a rusty tramp steamer rounding an ill-weathered Cape Horn. We are left in no doubt that Armstrong and his crew were wrestling with a machine of the post-war era. This could be half a century ago.

Once on the moon, however, the film looks to remind us how darn futuristic 1969 can still appear. The gold gleam of the visor. The still indigestible glimpse of a tiny Earth over a human being’s left shoulder. In some alternative universe where humans kept revisiting the moon, audiences are smiling indulgently at these rudimentary first steps. For us, First Man still has the quality of science fiction.

All that stuff is handled with the professionalism you expect from Hollywood at its most nakedly heroic. Justin Hurwitz’s wonderful score hangs around simple repeated refrains that pound home the increasing tension.

Cinematographer Linus Sandgren, an Oscar winner for Chazelle’s La La Land, tends towards a soupy gloom that makes even the Earth seem alien. There are fewer bravura set pieces than in the unavoidable The Right Stuff, but this film is better on the mechanics of space flight. Being an astronaut feels more like a job here.

Chazelle and his team have other things on their mind. For all that crash, bang and wallop, First Man is very much about the man inside the suit. That’s a challenge. Few recent US heroes have been so unknowable as Neil Armstrong.

The film supports the notion that it was his eerie cool and robotic unflappability that made him the ideal man for the most dangerous of all journeys. Who better to play such a role than the perennially blank Ryan Gosling?

The screenplay allows Armstrong an emotional core. Early on, his daughter, Karen, dies of a brain tumour and the weight of that loss hangs over him up to the film’s closing moment. But Armstrong’s defining characteristic remains his ability to function amid emotional or psychological turmoil. For the administrators this can only be a good thing. For his wife there is a downside to the control.

Claire Foy will get more demanding roles in her career, but she may be relieved that her dreaded “wife part” is more fleshed out than is usually the case. Foy grants Janet Armstrong intelligence and perception. She understands, as her husband does not, that his mental compartmentalisation shuts the family off from truths they need to confront.

He can get away with not considering the consequences of a fatal disaster (he’ll be dead, after all). But the family need to discuss that awful possibility. The decision to focus on that dilemma demonstrates psychological acuity on the screenwriters’ part.

Armstong’s apparent detachment does, nonetheless, drag the emotional temperature down to winter-cardigan levels. Foy aside, no surrounding character gets much chance to provide any compensatory glow.

Corey Stoll’s Buzz Aldrin is bluff and disrespectful, but he gets few nuanced scenes. Lukas Haas’s Michael Collins is barely visible. The picture is better at sketching the social and moral controversies that surrounded the mission.

Gil Scott-Heron’s poem Whitey on the Moon, declaimed in penumbra of Cape Kennedy, stresses the mono-cultural nature of the space programme. Voices on the TV remind us that citizens were already questioning the expense.

That last crowd eventually got their way. Before then, the world got a staggering spectacle that eventually generated a cracking hunk of old-school Hollywood entertainment.