Dominic Cooper: ‘Working with ex-girlfriends? What's the alternative? Sulk in a corner?’

How he nearly didn’t go for Mamma Mia! and why we need more women on film sets 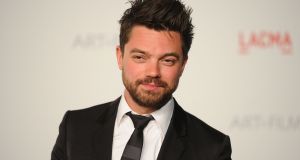 Actor Dominic Cooper says he was not expecting to get the part in Mamma Mia! and wasn’t sure if he wanted it anyway. Photograph: Jason Merritt/Getty Images.

Dominic Cooper nearly didn’t try for the first Mamma Mia! film. He was in the middle of shooting something else and reluctantly went along to the audition, not expecting to get the part, not sure he wanted it anyway. As he crossed the country in the rain, he thought: “I’m not a musical-theatre person. Why am I going?” But he sang a song at the audition – “I was terrified” – and got the part.

Then he went to see the stage show and was deeply moved. “It was incredible seeing an audience so swept away,” he says. “Wonderfully, it turned out to be something people really needed at that time – they were desperate for that escapism.” And then the film, starring Meryl Streep as the spirited single mother Donna, was released in 2008, just before the global economy tanked.

Its sequel, Mamma Mia! Here We Go Again, is out this week and – with its life-affirming sense of joy, love and sunshine – seems similarly well-timed. “This couldn’t be coming at a better time,” says Cooper. “It’s all been quite bleak and difficult to comprehend what’s going on. People occasionally need to go and sit in a dark space with people they love and forget everything.”

Cooper returns as Sky, the husband of Donna’s daughter, played by Amanda Seyfried. The actors had a relationship for several years after meeting on the first film and were brought together for the second. “That’s happened twice this last year,” Cooper says with a laugh – he also stars in the US TV series Preacher with his former partner, Irish actor Ruth Negga.

I would like to see more women on sets – there is a different and wonderful atmosphere. I think that’s what made it such a pleasant, non-competitive, relaxing and supportive environment.

Was it awkward? “I think, ‘What’s it going to be like?’ Then it’s fine. Ruth and I have stayed good friends. We both care massively about the show. We’ve worked together so much that we each know how the other works. She’s more honest with me with regard to the acting than anyone could ever be, which is helpful. And it’s great to see Amanda again. You’re working with somebody you know really well.” What, he asks, is the alternative? “Sulk in a corner? There’s no other option. Ultimately, you’re friends.”

It was striking at the time how female-dominated the Mamma Mia! show and film were. Judy Craymer produced, Catherine Johnson wrote and Phyllida Lloyd directed a story revolving around a mother and daughter. Did it feel different? “Yeah,” says Cooper. “I think it brought a more thought-provoking atmosphere. Sets are still terribly male-heavy. I would like to see more women on sets – there is a different and wonderful atmosphere. I think that’s what made it such a pleasant, non-competitive, relaxing and supportive environment. That’s where people produce their best work. I think it comes across on the screen.”

The sequel is more male – Ol Parker writes and directs – but Cooper says Craymer’s touch is all over it. “I find it hard to explain when I say it reminds me of my family. But it’s fun, it’s nurturing, it’s loving and I think it comes from her.”

Cooper is having a good year. Preacher is now in its third season and shares a sense of escapism with Mamma Mia! if nothing else. It’s violent and gory . Cooper plays Jesse Custer, a hard-drinking, chain-smoking preacher with supernatural powers, searching for God. He says the original DC comic, by Garth Ennis and Steve Dillon, “is very politically observant of people. Ennis never judges people’s religious beliefs – he creates maybe a little whirlwind that hopefully promotes conversation.”

Then there’s another new film, the low-budget British improvised drama The Escape, in which he is husband to Gemma Arterton’s suffocated, suburban wife, who snaps and abandons her family. “I loved it,” says Cooper. “These things really happen and they’re real emotional nightmares. It’s a joy to do Mamma Mia! – but I’m moved when I see something that makes me reflect or change, that encourages or enhances me as a person.”

There are moments in life like that, which everyone has, where you see different routes. I don’t know what it is that makes one push for one. You think, ‘If that hadn’t happened, how different everything could have been.

He describes The History Boys – Alan Bennett’s 2004 play that was the making of his career – in the same way. “We all still remind one another what a magical time that was,” he says of the cast. “It’s an amazing piece of writing and you can understand why people responded to it. People loved the language of it, the common understanding of what education is and what life is about.”

The play surged from the National Theatre to Broadway before becoming a film. However, Nicholas Hytner, the film’s director, told Cooper he was now too old to play a grammar school boy about to sit the Oxbridge exams. Cooper wouldn’t let it go, pointing out he had just played a 12-year-old, Will, in the National’s production of His Dark Materials .

That seems to show some determination, I say – cockiness even. “Thinking about it now, I’m actually quite surprised,” he says. “Me now might have gone, ‘OK, sure.’ There are moments in life like that, which everyone has, where you see different routes. I don’t know what it is that makes one push for one. You think, ‘If that hadn’t happened, how different everything could have been.’”

The History Boys also launched the careers of Russell Tovey and James Corden. “With James,” says Cooper, “you knew from day one he was going to take over the world.” Were there rivalries? He says there weren’t, unusually. “Towards the end of any show or film, it’s quite difficult because people start coming in with scripts. Everyone is like, ‘Oh yeah, what’s that?’ But we weren’t like that with each other. I’ve never really worked out why. Because I’ve done jobs where it’s been awful.”

One early difficult experience, he says, was on Band of Brothers, Steven Spielberg’s second World War TV series. “I’d never been on a film set and I was terrified,” he says, recalling that it was full of young male actors all competing with each other. Although he stresses that it was an “incredible project”, he remembers feeling “very young and very sad”. He had never acted to camera before and now found himself on one of the biggest TV shows going. “It was all to do with my own insecurities. It was camaraderie, competition and masculinity at its highest level. I just wasn’t ready for it. Luckily I got other work quite quickly. It could have been quite damaging. I could have gone, ‘Nah, this isn’t for me.’”

Cooper, now 40, grew up in Greenwich, south London. His mother was a nursery school teacher, his father an auctioneer. He didn’t do very well in his GCSEs but his drama teacher fought for him to be able to stay on. He landed a place at the London Academy of Music and Dramatic Art – and got funding. If he was starting out now, would he have the same opportunities? “No, I wouldn’t,” he says. Lamda are making “massive efforts to make sure that people from different backgrounds can go”, but he says there are barriers to people from diverse backgrounds. “It’s unattainable, people can’t comprehend it. ‘Mum, can I go off to study acting for three years? It will cost this much.’”

Cooper’s career got off to a flying start: he was cast in Mark Ravenhill’s Mother Clap’s Molly House at the National Theatre, and has worked steadily in TV and film – with just the odd part he might prefer to be forgotten. (Last year’s Stratton , in which he played a Special Boat Service commando, received terrible reviews.)