Review: No musical staffed by actors who sing like suffering badgers had any right to be so much fun 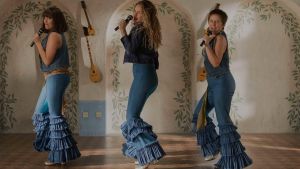 Few objective criteria exist to help us determine whether Mamma Mia! was a good film or a bad film. There were objectively terrible things about that Abba musical. Nobody with working ears could do anything other than grimace when Pierce Brosnan did whatever he did to the apparently indestructible SOS (if it can survive that it can survive a meteor strike).

The overall disorganisation suggested direction by someone situated on another continent to the set. Yet it sort of worked. No musical staffed by actors who sing like suffering badgers had any right to be so much fun.

The amusingly titled sequel has an even less robust story. It struggles to expand beyond the core song-cycle that drove the opening episode. Its only justification for concluding is its achievement in finally negotiating Cher to the top step of a stonier staircase than she habitually encounters in Vegas.

For all that, Mamma Mia! Here We go Again is at least as entertaining as its predecessor. It may even be a slightly “better film” (though I couldn’t say for certain that it’s a “good” one).

The new cast members are amusing. The film-makers just about get way with unearthing a few less well-known Abba songs. Crucially, the direction is more than competent.

Five years after the events of the first film, Sophie (Amanda Seyfried) is coping indifferently with the death of her mom Donna (Meryl Streep). While she plans a party in the Greek Villa she now runs – to which all the key cast members will travel – we shift back to learn the origins of the sexual odyssey that triggered the earlier film’s paternal confusion.

As before, the justification for the songs’ inclusion is sometimes appallingly shaky. When young Donna encounters a tethered horse, the brain combs Abba lyrics for equestrian references.

No such logic applies. She and her friends sing When I Kissed the Teacher as they graduate from (why not?) New College, Oxford. Is there a suggestion of an affair with Vice-Chancellor Celia Imrie? If so, I missed it. Anyway, it allows an excuse to cycle about the Thames Valley bellowing out choruses. That’s how Mamma Mia! rolls.

Then we’re off to an implausible version of Europe in 1979 where, though you may sing an Abba tune, you can go whole hours without hearing such a thing. Donna meets the three guys and says: “I Do, I Do, I Do” (though she doesn’t sing the similarly titled song).

Abba had so many hits you might imagine there’s at least another musical to be fashioned from those not already featured. That would be to underestimate quite how packed Mamma Mia! was with songs.

The current film reprises many numbers from part one – an entire ocean of Greek folk sing Dancing Queen – while airing only a few of the less famous tunes. Andante, Andante and My Love, My Life work well. Kisses of Fire does little to argue for elevation into the canon.

The highlight of the entire film may, however, be the magnificent shoehorning of the most famous Abba song not hitherto featured. It would probably constitute a spoiler to explain further, but imagine a Beatles musical in which Cher encounters a Yellow Submarine in central Nevada. Further imagine that, despite living in no sort of submergible, she goes on to sing the lyrics as originally written. That’s the level of madness we reach in the closing moments.

It’s a suitable end to a film that positively thrives on its own oddness. It also thrives on warmth, good nature and a sincere belief in friendship. The staging of Waterloo in a French restaurant is excellent. The final, epic over-stuffed Super Trouper – in which younger characters duet with their older selves – could scarcely be more joyous if it were staged in a bouncy castle.

Mamma Mia! Here We Go Again probably isn’t a good film, but it’s more diverting than many excellent ones.